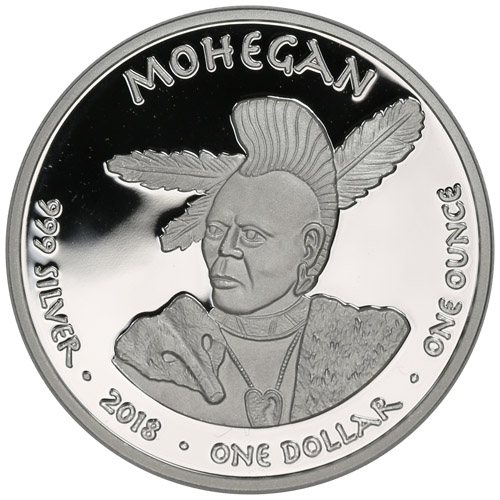 The 2018 Silver Native American Proof Dollar Collection from the Native American Mint continues with the Mohegan Whale design. The Mohegan tribe originated as part of the many tribes that spoke the Algonquin languages along the US East Coast when European settlers began to arrive. Right now, 2018 1 oz Proof Silver Connecticut Mohegan Whale Coins are available to purchase online at Silver.com.

Each of the 2018 1 oz Proof Silver Connecticut Mohegan Whale Coins in this listing comes to you from the Native American Mint with a protective plastic capsule. The coins in this series have a nominal face value of One Dollar, but it is not legal tender in the United States. Under US law, only the United States Mint possesses the authority to strike and issue official currency in US dollars.

The people of the Mohegan tribe were originally members of the Pequot tribes located in central and southern Connecticut. The Pequot were, like many others in the area, Algonquin speaking people. As European settlements increased in number and size on the East Coast, the tribes across the region began to compete with one another for increasingly scarce resources.

Following the Pequot War, the Mohegan people emerged as an independent tribe. The Pequot were betrayed by various other tribes, including the Mohawk from the Hudson Valley, and nearly wiped out. Today, the Mohegan people number some 1,300 people in Connecticut and are federally recognized by the US government.

On the reverse side of the 2018 1 oz Proof Silver Connecticut Mohegan Whale Coin, you’ll find the image of a whale. One of the most important economic factors for the Pequot people, and later the Mohegan, were fish and whales from the tributaries and coastal areas in and around Connecticut. One of the many reasons for the downfall of the Pequot was the loss of lands with access to tributary rivers so the people could easily access coastal waters.

The obverse face of 2018 Proof Silver Connecticut Mohegan Whale Coins features the portrait of a member of the tribe. The image is accompanied by inscriptions of the tribal name and that of the tribe that operates the Native American Mint.

If you have any questions as you buy silver, please don’t hesitate to ask. Silver.com customer service is available at 888-989-7223, online using our live chat, and via our email address.