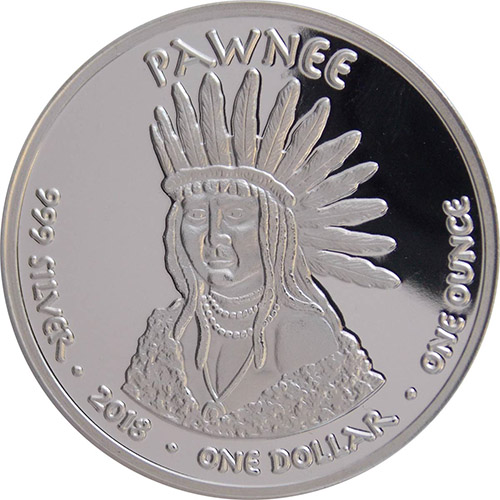 The Kansas Pawnee Pronghorn Coin comes along as the third issue of the 2018 release schedule for the Native American Mint’s Proof Silver Dollar Series. Each of the coins in this collection bears a face value, but does not have legal tender status in the US. That does not, however, detract from the stunning design and silver value of these beautiful coins. The 2018 1 oz Proof Silver Kansas Pawnee Pronghorn Coin is now available to you for purchase online at Silver.com.

Each of the silver coins for sale in this series is a proof version. Proof coinage typically has a frosted design set that overlays a background field with a deeply-mirrored, clear finish. This contrast of the two elements creates visual separation between the design field and background that is easy for the eye to spot.

Today, the Pawnee Nation are a federally recognized tribe in the United States registered as the Pawnee Nation of Oklahoma. Though the 5,600 members of the tribe now live in Oklahoma, at the turn of the 19th century the Pawnee lived throughout the plains in Nebraska and Kansas, and were among the largest and most powerful Native American tribes in the west with a population in excess of 10,000 people.

On the obverse of the 2018 1 oz Proof Silver Kansas Pawnee Pronghorn Coin is the portrait of a tribal member. Though the number of Pawnee alive today seems much lower than the historic high, warfare, failed crops, and disease had pushed their numbers as low as 2,400 by 1873. Engravings on this face include the name of the issuing tribe.

The reverse of the Silver Kansas Pawnee Pronghorn Coin bears the image of a pronghorn. This species is ubiquitous throughout the interior western and central plains of North America. Although it is often referred to as an antelope, the pronghorn is actually the only surviving member of the Antilocapridae family, which used to include 12 species in North America during the Pleistocene period.

Proof Silver Native American Dollar coins are shipped in protective plastic capsules to ensure the beautiful finish of the coins, and preserve the design found on both the obverse and reverse faces of the product.

We encourage all Silver.com customers to reach out to us with questions. You can call us on the phone at 888-989-7223, chat with us live online, or simply send us an email with your inquiries.