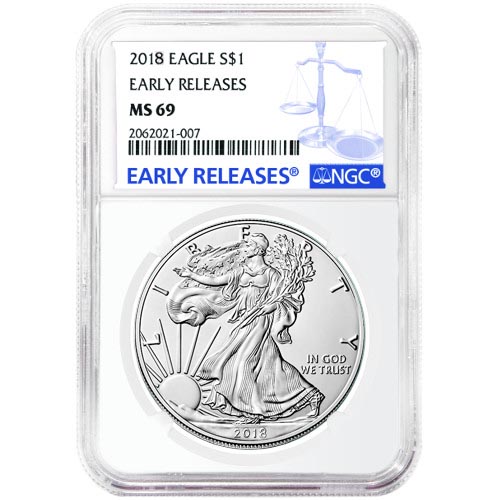 The Silver Eagle coins were authorized by Congress in 1986 and mandated to include silver sourced only from within the United States. That mandate was extended by Congress in 2002, and the US Mint has faced intense demand for the silver coins several times in recent years. The vast majority of the coin’s top-selling years have occurred since the Great Recession.

On the obverse of all Silver American Eagle coins you’ll notice the design of Walking Liberty. Created in 1916 by Adolph A. Weinman, this figure of Liberty is indicative of the nation’s drive toward a brighter future. Liberty wears the American flag draped over her shoulders and walks with arm outstretched toward the setting sun as it falls behind the mountains on the horizon.

All 2018 1 oz Silver American Eagle Coins in this listing are in near-perfect condition. Coins in Mint State 69 condition feature full, original mint luster and have a maximum of two minor detracting flaws. These flaws are limited to minuscule hairlines and contact marks found outside the primary focal areas.

We encourage Silver.com customers to call us at 888-989-7223 with questions. You can also connect with us online using our live chat and email features.