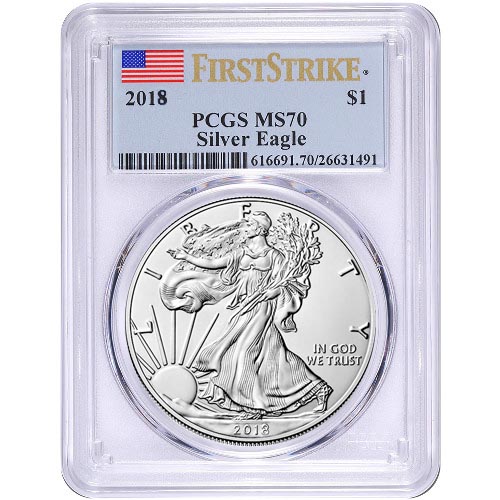 Silver Eagle coins are produced by the United States Mint each year. Commonly offered in 1 oz silver, the bullion and proof coin have been around from the beginning in 1986. The burnished version of the coin has been offered since 2006 on the 20th anniversary of the series. Three mint facilities have contributed to production of the coins, with the San Francisco Mint coining the Silver Eagle from 1986 to 1998, the Philadelphia Mint coining Silver Eagles in 1999 and 2000, and the West Point Mint since 2001.

On the obverse of all 2018 1 oz Silver American Eagle Coins is the depiction of Walking Liberty. Indicative of America’s constant march toward a brighter future, Liberty is shown walking toward the setting sun with the American flag draped over her shoulders. Designed by Adolph A. Weinman in 1916, it was used on the half-dollar coin from 1916 to 1947.

The reverse includes the most recent update to the heraldic eagle of the US. Revamped in 1986 by John Mercanti, the former Chief Engraver of the United States Mint. First used in 1794, this modern depiction includes the American bald eagle set behind the national shield as it clutches the arrows of war and the olive branch of peace.

If you have any questions about the Silver American Eagle coins, Silver.com customer service is available to help. You can feel free to call us at 888-989-7223, online using our live chat feature, and via our email address.