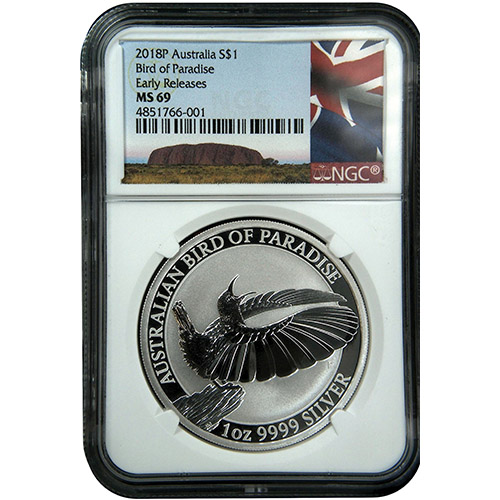 In the latest release from the Perth Mint, a bird species native to the rainforests of New Guinea and northeastern Australia is featured on both gold and silver bullion coins. The Bird of Paradise is a species known for its beautiful, colorful plumage. The 2018 1 oz Silver Australian Bird of Paradise Coin is currently available to you for purchase online at Silver.com with NGC certification.

In Australia, the species is known by one of two names. The local Yidinji people who have inhabited northeastern Australia for generations refer to the creatures as the duwuduwu, while those of European descent likely know the bird as Victoria’s riflebird. The species is so-named by European descendants because its colorful plumage matched that of the 19th-century members of the Queen’s Riflemen Brigades in the British Royal Army.

On the obverse of the 2018 1 oz Silver Australian Bird of Paradise Coin is the image of Queen Elizabeth II. Her Majesty is featured on this side of the coin in right-profile relief. This is the fourth-generation design for British and Commonwealth coinage and was created in 1998 by Ian Rank-Broadley for the Royal Mint of England.

The reverse of the 2018 Silver Australian Bird of Paradise Coin features the design of the Bird of Paradise as it spreads its wings in preparation to lift off from a broken tree branch. The Bird of Paradise is referred to as Victoria’s riflebird in a nod to the reigning monarch of the United Kingdom in 1848, Queen Victoria I.

These 2018 1 oz Silver Australian Bird of Paradise Coins are available in near-perfect condition. The Mint State 69 certification indicates the presence of full, original mint luster with a maximum of two minor detracting flaws. Early Release coins must arrive at the NGC within 30 days of their release date in order to qualify.

We encourage Silver.com customers to call us on the phone at 888-989-7223 with questions. You can also reach out to us online through our live web chat and email address with inquiries.