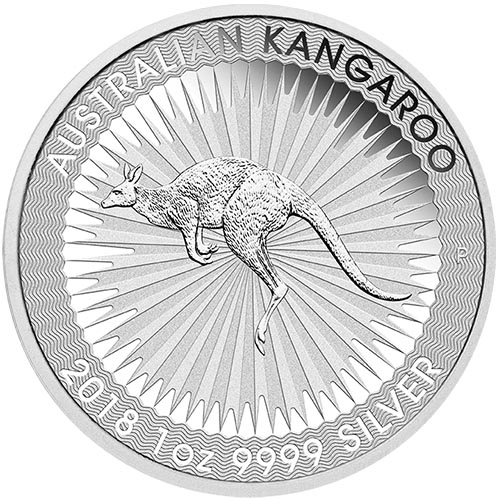 The Silver Australian Kangaroo coin is the youngest of the annual release silver coins for sale from the Perth Mint. The Silver Kookaburra started the trend when it was released in 1990, and that was followed by the Silver Koala in 2007. Building on the success of those series, the mint introduced the new Silver Kangaroo bullion coin in 2016.

For the Silver Australian Kangaroo coin series, the Perth Mint selected one of the most iconic Australian coin designs. Dr. Stuart Devlin created the image of a red kangaroo with a sunburst behind its figure representing the setting sunlight. Devlin is an Australian artist and metalworker who returned to the country in 1962 and won a 1964 competition to design the nation’s new decimal coinage.

On the reverse of all 2018 1 oz Silver Australian Kangaroo coins is the image Devlin created. It depicts red kangaroo, the largest of the four kangaroo species on the continent, hopping from the right to the left across the coin. The rays of sunlight emanating from the background frame the kangaroo and reflect a setting sun’s rays.

The obverse of all Silver Australian Kangaroo coins features the image of Queen Elizabeth II. British monarchs have always featured on the obverse of Australian coinage, with this fourth-generation depiction of the Queen created in 1998 by Ian Rank-Broadley.

Silver Australian Kangaroo coins are issued with an unlimited mintage, meaning they’ll be struck to meet demand until the end of the calendar year of issue stamped on the coins; December 2018. Silver Kangaroos ship individually in protective plastic, in multiples of 25 inside sealed mint tubes, or Mini Monster Boxes containing 10 tubes of 25 coins each.

We encourage Silver.com customers to contact us with questions. You can call us at 888-989-7223, chat with us live online, or simply send us an email.