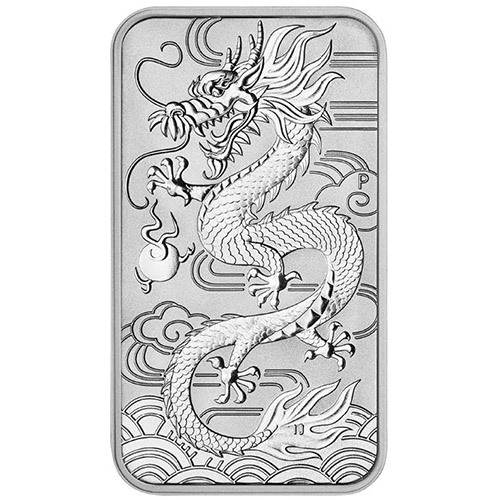 The dragon is a creature that is inextricably linked with the cultural background and mythical lore of China. Considered the official symbol of the nation and its most prominent on the global stage, the dragon appears on a unique coin now offered from the Perth Mint. Today, 2018 1 oz Silver Australian Rectangular Dragon Coins are available to you online at Silver.com.

Dragons have persisted in the mythical lore and cultural belief of human civilizations around the globe for thousands of years. During the medieval period in Europe, the dragon was a symbol of terror and something to be vanquished by brave, willing knights. European depictions of the dragon differ compared to Eastern cultures though.

While Europeans viewed dragons as evil and physically depicted them as flying beasts with four legs and wings, Eastern cultures took a different perspective. For China’s culture, the dragon is a powerful and wise beast known to bring good fortune. The dragons of Eastern cultures are often depicted as serpents with six legs and no wings, contrasting a bit with the Western depictions.

All 2018 1 oz Silver Australian Rectangular Dragon Coins in this listing are in BU condition. Coins in BU condition show no indication of wear and tear from handling, but aren’t perfect specimens either. There is the potential for breaks in the luster, spotted surfaces, or contact marks from the production process.

On the reverse of these beautiful 2018 1 oz Silver Australian Rectangular Dragon Coins you’ll find an intricate depiction of the dragon. The long serpent’s body snakes down the face of the coin, its mouth open at the top revealing its serpent-like tongue and its legs visible down the length of its body with sharp claws. There is a “P” mint mark included in the ornate background designs.

The obverse of the Silver Australian Rectangular Dragon Coin features the effigy of Queen Elizabeth II. Her Majesty is the current longest reigning monarch in the world, and has surpassed all other British monarch as the longest reigning queen or king. Elizabeth II has featured on British and commonwealth coinage since 1953, and this is the fourth-generation effigy created in 1998 by Ian Rank-Broadley.

Please don’t hesitate to reach out to Silver.com with questions. You can contact us on the phone at 888-989-7223, chat with us live online, or simply email us with your inquiries. The price of silver per ounce is regularly updated on our homepage as well for your convenience!