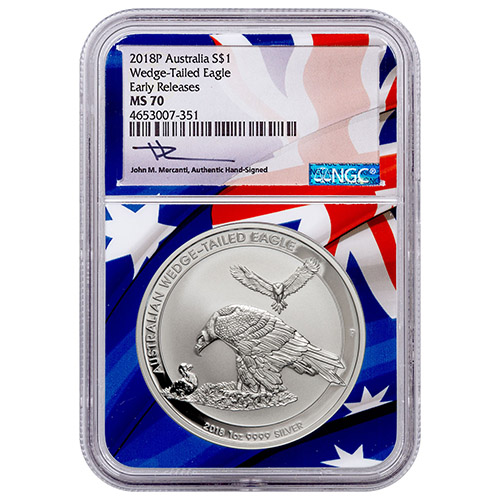 One of the newer silver coins for sale from the Perth Mint is the stunning Australian Wedge Tail Eagle coin. Featuring a new design each year dating to 2016, the collection has proven popular with investors and collectors for its rotating design use and low mintage figures. The 2018 issue has a low mintage of just 50,000 coins and is designed by John Mercanti. The 2018 1 oz Silver Australian Wedge Tail Eagle Coin is available to you online today for purchase at Silver.com.

The Australian Wedge Tail Eagle silver bullion coin collection debuted from the Perth Min 2014. For the first two years of availability, the same design was used on the reverse to depict the massive predatory bird species commonly found on the Australian continent. Beginning in 2016, the Perth Mint altered course to bring the series in line with other annual-release bullion by using a new design each year.

For that first new design, John M. Mercanti was hired to create a special and breathtaking depiction of the wedge tail eagle for the coin series. Mercanti was the 12th Chief Engraver of the United States Mint, serving in that position from May 2006 until his retirement in 2010. While working for the mint, he famously created designs for the 1984 Olympic gold ten dollar coin, 1986 Statue of Liberty Dollar coin, and the designs of five states in the circulation 50 State Quarters Program.

On the reverse of 2018 1 oz Silver Australian Wedge Tail Eagle Coins is the design Mercanti created as the third of his own work in the series, and fourth overall in the collection. It depicts a large, male eagle returning to the nest in the distance while a female eagle nuzzles close to the young hatchling found within.

The obverse of all Silver Australian Wedge Tail Eagle Coins in this collection bears the effigy of Queen Elizabeth II. This is the fourth-generation design and was created in 1998 by Ian Rank-Broadley for original use on British coins and later use on commonwealth coinage.

Each 2018 1 oz Silver Australian Wedge Tail Eagle Coin here is certified Mint State 70 by the NGC, indicating full, original mint luster and no detracting flaws present. The Mercanti label is an exclusive deal with NGC where John M. Mercanti signed the labels included inside the slab.