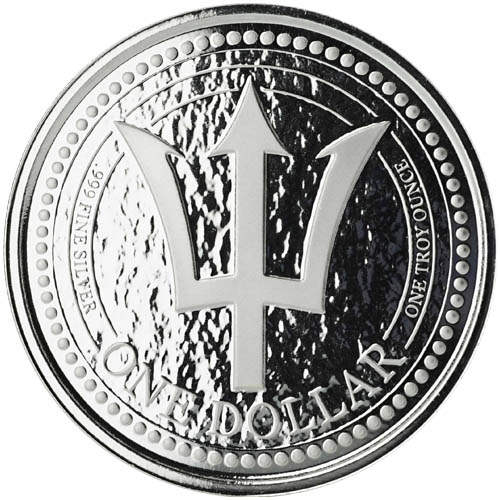 Barbados is located in the Lesser Antilles in the Caribbean Sea and is the easternmost island in the West Indies. The island was colonized by the British starting in 1625 when sailors aboard the Olive Blossom claimed the island in the name of the reigning King James I. By 1627, the first British settlers arrived and the island later became a British colony and hub of the African slave trade in the region.

Symbols within the Barbadian national shield and its flag represent the nation’s eventual break from the United Kingdom more than 300 years after the British set foot on the land. In 1966, Barbados officially broke from the kingdom and would eventually claim full independence, though it is still part of the Commonwealth realm today.

On the reverse of 2018 1 oz Silver Barbados Trident Coins is the image of a large trident head. An ancient symbol of power, the trident was used by the Roman god Neptune to control freshwaters and the seas. Given its position as a small island surrounded by miles of water, the trident is an important symbol in Barbados that connects the people to their seafaring history.

The obverse of 2018 Silver Barbados Trident Coins includes the national coat of arms for Barbados. The shield includes a fig tree with two blooms of the national flower, the Pride of Barbados, in the upper corners of the shield. The shield itself is supported by a dolphin fish to the left and a pelican to the right.

We encourage all Silver.com customers to call us with questions at 888-989-7223. You can also connect with us online through our live chat and email address.