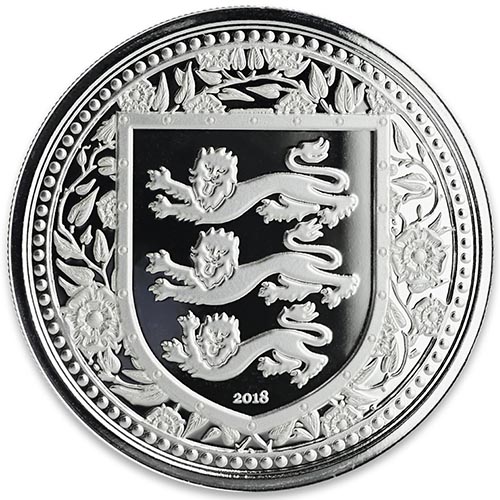 There’s a new series of silver bullion coins available from the Scottsdale Mint and it represents the latest collaboration between the private American mint and a foreign nation. This new collection represents Gibraltar, a small British Overseas Territory perched at the very southern tip of the European continent on the Iberian Peninsula. Today, 2018 1 oz British Silver Royal Arms of England Gibraltar Coins are available to you online at Silver.com.

King Richard I of England reigned for just 10 years, but he left a lasting impression on the realm. The son of England’s first-ever monarch from the House of Plantagenet, Richard I spent much of his reign overseas defending the realm in France and fighting as the main Christian commander in the Third Crusade. His lasting impression in England was the adoption of the first official Royal Arms of England.

All 2018 1 oz British Silver Royal Arms of England Gibraltar Coins are available to you in Brilliant Uncirculated condition and housed in protective packaging. The 1 oz silver coin in the series is one of seven options that include silver bullion, gold bullion, and silver reverse proof coins.

The reverse of 2018 British Silver Royal Arms of England Gibraltar Coins includes the Three Lions shield known as the Royal Arms of England. Adopted during the late-12th-century reign of Richard I, the design became synonymous with the King of England and remained unchanged until 1369 when King Edward III altered it to add the French fleur-de-lis to strength British monarch claims to French lands.

Richard I displayed the Royal Arms of England with three lions for the first time in the kingdom’s history. Previous designs used either one or two lions instead. His design included three lions in a vertical display in passant guardant stance, with the lions’ heads looking at the viewer and the right paw raised.

On the obverse of 2018 1 oz British Silver Royal Arms of England Gibraltar Coins is the image of Queen Elizabeth II. This is the third-generation design of the Queen during her reign and was created in 1984 by Raphael Maklouf. This right-profile portrait of Her Majesty depicts her with the Royal Diadem crown and was used from 1984 to 1997.

Please feel free to reach out to Silver.com with questions. You can call us on the phone at 888-989-7223, chat with us live online, or simply send us an email.