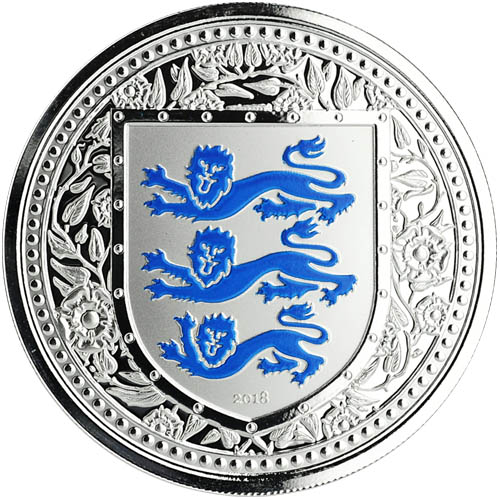 The Royal Arms of England is commonly associated with the reigning monarch of England. The design most people associate with the monarch, the Three Lions, was adopted during the 12th-century reign of King Richard I. Today, 2018 1 oz British Silver Royal Arms of England Gibraltar Reverse Proof Coins in blue colorization are available to you online at Silver.com.

In the Royal Arms of England coin series from the Scottsdale Mint, the reverse proof coins are available in five different colorized silver finishes. The coins come with red, blue, yellow, and purple options on the Three Lions that include a mintage of just 500 coins. In an ultra-rare issue, one coin with black colorization on the Three Lions is available with just 99 coins.

On the reverse of 2018 1 oz British Silver Royal Arms of England Gibraltar Reverse Proof Coins, you’ll find the Royal Arms of England designed during the reign of King Richard I. Known as Richard the Lionheart, his design was the first to incorporate the Three Lions into the design. Previous designs used either one or two.

Richard the Lionheart reigned from 1189 to 1199 and spent much of that time abroad defending Plantagenet lands in France or serving as the lead Christian commander in the Middle East during the Third Crusade.

The obverse of 2018 British Silver Royal Arms of England Gibraltar Reverse Proof Coins includes the image of Queen Elizabeth II. This is the third-generation design used from 1984 to 1997 on British coinage and designed by Raphael Maklouf. The image captures Her Majesty in right-profile relief and depicts her with the Royal Diadem crown.

Please feel free to reach out to Silver.com with questions. You can call us at 888-989-7223, chat with us live online, or simply send us an email with your inquiries.