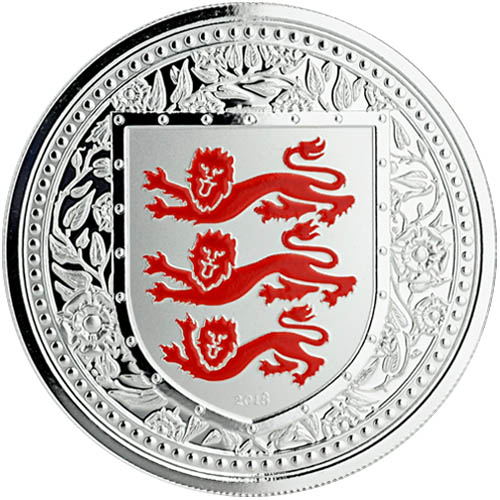 The new Royal Arms of England series from the Scottsdale Mint is issued for the British Overseas Territory of Gibraltar. Situated at the tip of the Iberian Peninsula and European continent, this tiny outcrop of rocky land has been in British control since 1704. Right now, 2018 1 oz British Silver Royal Arms of England Gibraltar Reverse Proof Coins in red are available to purchase online at Silver.com.

Each 2018 1 oz British Silver Royal Arms of England Gibraltar Reverse Proof Coin in this listing comes to you with a reverse proof finish. Coins with this finish have strong, frosted background fields with deeply-mirrored, clear design elements overlaying that field. The reverse proof British Royal Arms of England Gibraltar silver coins are colorized in one of five colors. These coins have a red finish on the Three Lions in the Royal Arms design.

Gibraltar was taken by Anglo-Dutch forces in 1704 during the War of the Spanish Succession. It was formally ceded to the United Kingdom in 1713 in the Treaty of Utrecht and remains in British control today. Residents of the small parcel of land have repeatedly voted against a return to Spanish control in various referendums.

Previous designs had used only one or two lions. Richard the Lionheart, as he was known for his numerous battlefield victories, adopted a shield with Three Lions in a passant guardant pose. The Royal Arms of Richard I’s design were used by Plantagenet kings from 1189 until 1369 with no change.

The obverse of 2018 British Silver Royal Arms of England Gibraltar Reverse Proof Coins features the right-profile portrait of Queen Elizabeth II. Her Majesty is captured in a third-generation portrait from Raphael Maklouf used on British coinage from 1984 to 1997.