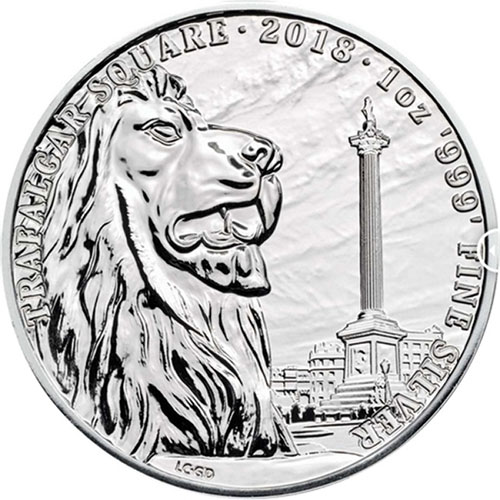 The Landmarks of Britain collection from the Royal Mint takes silver collectors across the country to some of the most important monuments, buildings, and locations in the nation’s history. The third release of this popular series focuses on one of the most prominent public spaces in London which is both a symbol of democracy and military victory for Britons. Right now, 2018 1 oz Silver British Trafalgar Square Coins are available to purchase online at Silver.com.

Each of the 2018 1 oz Silver British Trafalgar Square Coins in this listing is shipped inside of a protective capsule to ensure its pristine condition and beautiful design. The coins of the Landmarks of Britain Series have limited mintages and national significance. Previous designs in the series include Tower Bridge and Big Ben.

The King’s Mews, a collection of stables and a carriage house, stood on the grounds of Trafalgar Square from the 13th century until the reign of King George IV. The King had the mews moved to Buckingham Palace and John Nash was tasked with redeveloping the area into the commemorative grounds it is today.

On the reverse of the 2018 1 oz Silver British Trafalgar Square Coin is the image of Lion overlooking the scenes at Trafalgar Square. Nelson’s column features prominently in the background and is named for the victorious Admiral Horatio Nelson. His figure stands at the top of the column and is guarded at its base by four bronze lions. Today, Trafalgar Square is the site of public demonstrations and Christmas celebrations by Britons.

The obverse of the Silver British Trafalgar Square coins features Queen Elizabeth II. This is the fifth-generation right-profile portrait of Her Majesty and was created in 2015 for the Royal Mint by engraver Jody Clark.

If you have any questions when buying silver, please contact Silver.com. You can reach us at 888-989-7223, chat with us live online, or email us directly.