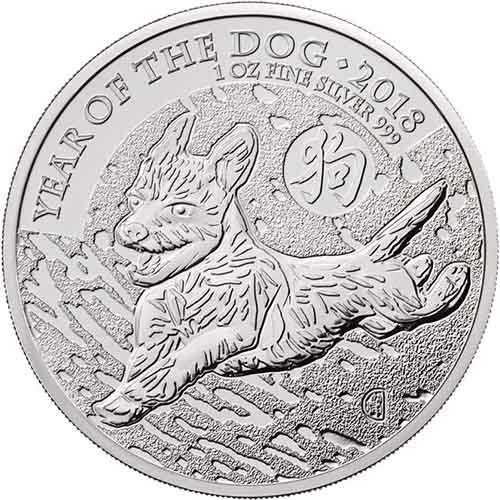 If you’re a fan of the gold and silver lunar coins in the precious metals market, the Royal Mint’s Shengxiao Collection of lunar-themed designs is something to look forward to each year. Now in its fifth year of availability, the designs of the British Lunar Series are equal in quality and stunning intricacy to that of the popular Perth Mint series. The 2018 1 oz Silver British Year of the Dog Coin is now available to you online at Silver.com.

The Shengxiao Collection of lunar series silver bullion coins from the Royal Mint launched in 2014 with Chinese-British artist Wuon-Gean Ho as the designer of the coins in the series. Unlike the Perth Mint collection, the Royal Mint Shengxiao Series features the same design on the silver and gold coins released each year.

Ho is the only artist to have crafted designs to date in the Shengxiao Series for the mint. She was born in Oxford in 1973 and possesses a BA in History of Art from Cambridge University. Her main focus of work is on woodblock printmaking, a craft she studied in Japan in 1998.

On the obverse of the coins in the Silver British Year of the Dog release, you’ll find the latest update to Queen Elizabeth II’s portrait on British coinage. Created in 2015 by Jody Clark, this fifth-generation right-profile portrait captures the Queen at the age of 89. Just 33 years old when he created this effigy, Clark is the youngest Royal Mint engraver to ever complete Her Majesty’s portrait for currency.

The reverse of the 2018 1 oz Silver British Year of the Dog Coin features the image of a terrier breed dog as it runs across the coin’s design field. The intricate background field of the design is known as a guilloche finish and is representative of a dog’s nose print. Engravings on this side include “Year of the Dog,” the issue year of “2018,” and the weight, metal content, and purity of the coin.

All 2018 1 oz Silver British Year of the Dog Coins listed here are in BU condition. Coins in BU condition show no signs of wear and tear, but minor flaws are possible as a result of striking blanks during production. These flaws include possible breaks in the luster, spotted surfaces, or contact marks.

We encourage Silver.com customers to contact us with questions. You can reach us at 888-989-7223, chat with us live online, or simply send us an email.