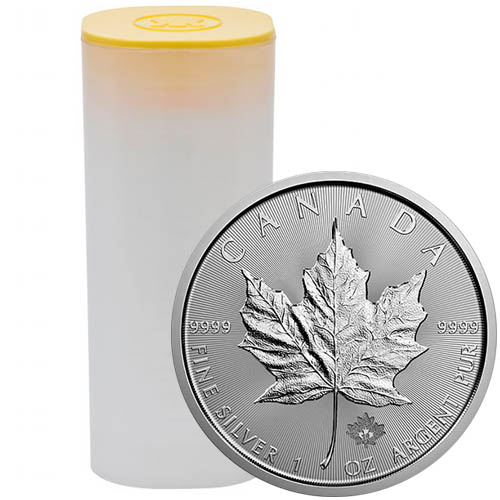 Silver Canadian Maple Leaf coins are a popular selection among investors each year. Unlike many other silver bullion offerings, these annual coins have .9999 pure silver content backed by the government of Canada. Struck by the Royal Canadian Mint annually, these coins debuted back in 1988. The 2018 Silver Canadian Maple Leaf Coin is available to purchase online today in a mint tube at Silver.com.

In this Silver.com listing, the 2018 Silver Canadian Maple Leaf coin is yours to purchase inside of Royal Canadian Mint tubes. Each of the individual tubes contains a total of 25 Silver Maple Leafs, with a total content of 25 Troy oz of .9999 fine silver. All coins in the tube are available in BU condition. In 2018, the Royal Canadian Mint debuted MINTSHIELD Technology. This invisible barrier is applied to the coin’s surface to protect against the occurrence of “white spots” on the coin during production and storage. All 2018-dated silver bullion Maple Leaf coins from RCM feature this breakthrough technology!

The reverse of all 2018 Silver Canadian Maple Leaf coins includes the sugar maple leaf. The official symbol of Canada, the maple leaf has appeared on Canadian documents and government seals for more than a century. Included on both sides of the coins are radial lines for increased counterfeiting security. This reverse side also has a laser-engraved maple leaf privy with a security marker included within that is visible only under magnification and reads “18” for the release year.

Each 2018 Silver Canadian Maple Leaf coin in this tube is in BU condition. Coins in BU condition have no signs of wear and tear, though you may notice minor flaws ranging from breaks in the luster and spotted surfaces to contact marks.

We encourage all Silver.com customers to contact us on the phone at 888-989-7223 with questions. You can also connect with us online through our live chat and email features.