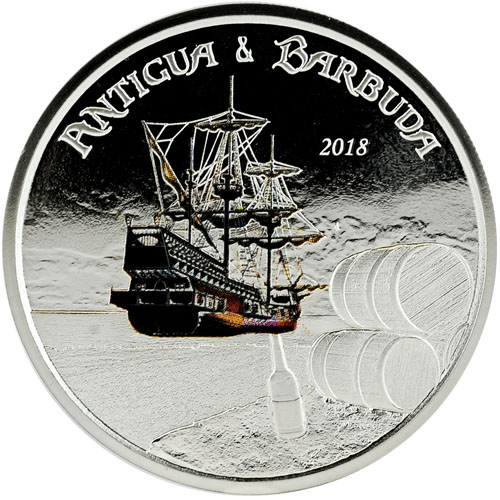 Each coin design in the new EC8 collection from the Scottsdale Mint and Eastern Caribbean Central Bank includes four options per release. The coins represent the eight nations aligned together in the ECCB and include a silver bullion, colorized silver, gold bullion, and colorized gold option at release. Right now, 2018 1 oz Colorized Silver Antigua & Barbuda Rum Runner coins are available to purchase online at Silver.com.

Each of the individual 2018 1 oz Colorized Silver Antigua & Barbuda Rum Runner Coins in this listing is available as a beautiful, colorized proof. There is a colorized layer of lacquer applied to the pirate rum-running ship on the coin’s reverse design field. The coins in the silver proof range are individually packaged in capsules and commemorative boxes by the Scottsdale Mint.

The new EC8 Series from Scottsdale Mint and the Eastern Caribbean Central Bank represents the eight nations that use the ECCB’s Eastern Caribbean Dollar (XCD). Antigua & Barbuda is first in the 2018 collection and depicts a design that reflects the rum industry of the 17th and 18th centuries.

On the obverse of each 2018 1 oz Colorized Silver Antigua & Barbuda Rum Runner coin is Queen Elizabeth II. Her Majesty is featured here in the right-profile portrait created by Ian Rank-Broadley in 1998 for the Royal Mint as a fourth-generation effigy of the Queen during her reign.

The reverse of the 2018 1 oz Colorized Silver Antigua & Barbuda Rum Runner Coin includes the image of a pirate frigate waiting to load some stolen barrels of rum into its cargo bay and take off for ports unknown. Pirates often looted merchant vessels for rum to then sneak it into the port cities throughout the West Indies and North America where spirits were heavily taxed.

Rum production in Antigua & Barbuda dates back to the early 1700s following the introduction of sugar to the islands. Sugarcane byproducts were the primary ingredients in the fermentation and distillation of rum, which became a major spoke in the economic wheel of Caribbean plantation owners during this era.