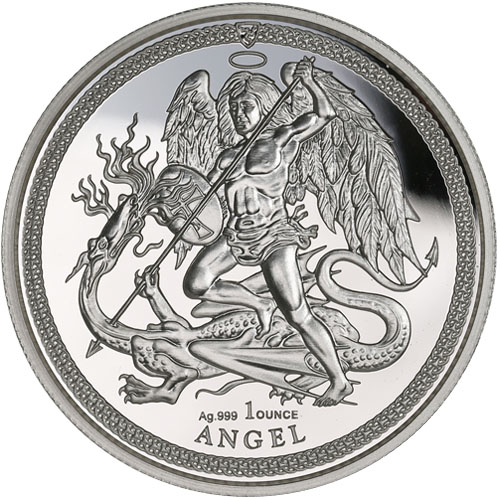 Kingdoms and nations throughout Europe have previously issued an angel design on coinage based upon the images of Saint Michael slaying a dragon in battle. From France on the continent to the tiny island of the Isle of Man, the angel coin design has been used multiple times over the last 800 years. Right now, 2018 1 oz Silver Isle of Man Angel Coins are available to purchase online at Silver.com.

Each of the 2018 1 oz Silver Isle of Man Angel Coins in this listing comes with an individual capsule to house the coin. The “proof quality” visuals of the coin included frosted design elements for Saint Michael, the dragon, and the effigy of Queen Elizabeth II. The background field has a proof finish with mirrored elements.

The angel coin was first issued as an English gold coin by Edward IV of England. Designed in 1465 after the French angelot, or ange, coins the history of the angel design in France dates back to 1340. In England, the Gold Angel was a predecessor to the gold noble coin which was first issued by King Edward III in 1344 but had low mintage figures and only modest adoption as a circulation coin.

On the obverse of the 2018 1 oz Silver Isle of Man Angel Coin, you’ll find the image of Queen Elizabeth II. Her Majesty is featured here in right-profile relief with the Royal Diadem crown on her head. The Queen’s effigy as depicted here was created for the Isle of Man series by Jody Clark, who also created the popular fifth-generation design of Her Majesty for the Royal Mint of England.

The reverse side of the 2018 Silver Angel Coin from the Isle of Man depicts Saint Michael as he slays the dragon. Popular depictions of Saint Michael and the dragon on coinage refer to the Revelation of St. John which discuss the end of the world in a massive war between the forces of good and evil, with the archangel Michael leading the Armies of God.

If you have any questions, please feel free to contact Silver.com. Our customer service team is available to you at 888-989-7223, online using our live chat, and via our email address. The latest silver prices are always available on our website as well!