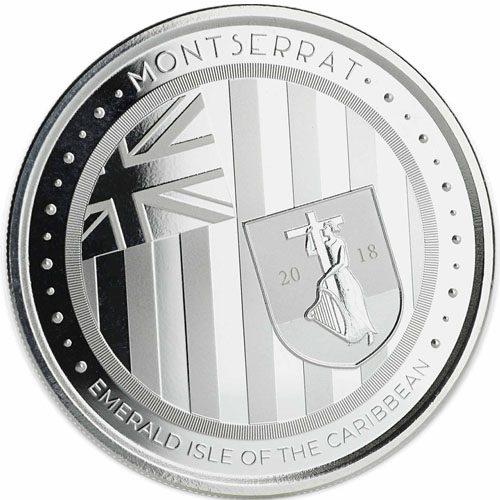 The silver for sale in the EC8 Caribbean Series from Scottsdale Mint offers buyers impressive variety. The silver coins include eight different designs throughout the collection, with each coin design available in silver bullion and colorized silver bullion options. Today, 2018 1 oz Silver Montserrat Emerald Isle of the Caribbean Coins are available to you online at Silver.com.

The EC8 Caribbean Series debuted in 2017 from Scottsdale Mint in response to the popularity of the Cayman Islands coin it issued. Drawing attention to the Caribbean with popular designs, Scottsdale Mint teamed with the Eastern Caribbean Central Bank to issue designs starting in 2017 and continuing into 2018 which reflect the member nations of the ECCB.

All of these 2018 1 oz Silver Montserrat Emerald Isle of the Caribbean Coins are available to you in Brilliant Uncirculated condition. The coins ship in individual packaging or in sheets of five. The limited mintage of 25,000 is extremely low for a silver bullion issue.

On the obverse of 2018 Silver Montserrat Emerald Isle of the Caribbean Coins is the image of Queen Elizabeth II. All coins in the EC8 Caribbean Series share this design as members of the British Overseas Territory collective. The Queen’s right-profile portrait used here comes from Ian Rank-Broadley who created it in 1998 as the fourth-generation design for the Royal Mint.

The beautiful coastline and lush lands of Ireland have, for centuries, been known as the Emerald Isle. Montserrat may seem a world away from Ireland, but many of its people have Irish ancestry as countless Irish people came to Montserrat starting in 1632 as prisoners, indentured servants, and even forced laborers. The familiar look of Montserrat’s coastline led many to call it the Emerald Isle of the Caribbean.