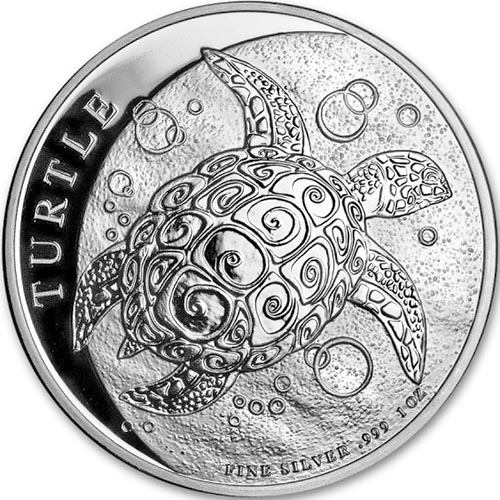 In 2010, the Silver Fiji Taku coin series debuted from the New Zealand Mint. These coins had the same hawksbill turtle coin design still found today on the Silver Niue Hawksbill, but with Queen Elizabeth II’s effigy on the 2010-2012 releases and the Fijian national crest on the 2013 issue.

Starting in 2014, the coins were offered as the Silver Niue Hawksbill Turtle Coin. In an odd twist, the change in nation of issue came down largely to geopolitical issues involving the government in Fiji. Whatever the situation there, silver enthusiasts remained fascinated with the Hawksbill Turtle Coins.

All 2018 1 oz Silver New Zealand $2 Niue Hawksbill Turtle Coins are in BU condition. Coins in this condition show no signs of wear and tear. However, minor flaws from the production process are possible and include breaks in the luster, spotted surfaces, or contact marks.

The obverse of the Silver Niue Hawksbill coins includes the effigy of Queen Elizabeth II. British monarchs traditionally feature on the obverse of all British and commonwealth coins, with Elizabeth II featured since 1952. This is the fourth-generation right-profile portrait of Her Majesty, and it was created in 1998 by Ian Rank-Broadley.

On the reverse of the 2018 1 oz Silver Niue Hawksbill Turtle Coin you’ll find the aquatic tortoise as it swims gracefully through the warm bubbles of the Pacific Ocean. The turtle has a sharp, curved snout and ornate, colorful patterns on its shell design.

Niue Hawksbill Turtle Coins are a product of the New Zealand Mint. Located in Auckland, it is the only private mint in New Zealand and has no affiliation with the local government. New Zealand coinage is produced overseas by the Royal Canadian Mint and Royal Mint.

Please don’t hesitate to ask questions. Silver.com customer service is available to you at 888-989-7223, online using our live chat, and via our email address.