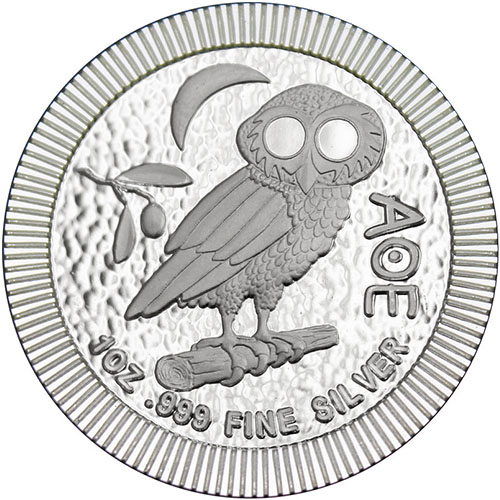 The Athena Owl coin is issued for the nation of Niue and first debuted in 2017. Each coin has a unique design plucked right from one of human history’s greatest civilizations, and is updated as a modern bullion coin with the addition of a beautiful background finish. Today, 2018 1 oz Silver Niue Athena Owl Stackable Coins are available to you online at Silver.com.

Athena was one of the most important goddesses in Greek mythology. Known as Minerva in Roman mythology, she was the goddess of wisdom, handicraft, and war. Athena was viewed as a patron and protector of many cities in the ancient Greek world. None were more important to her than the city of Athens.

A constant companion to Athena was her Owl. The owl was traditionally used to represent Athena in animal form or used as a companion to her in other artistic depictions. The Owl of Athena design is a symbol of knowledge, wisdom, and perspicacity to many civilizations in the Western world.

All 2018 1 oz Silver Niue Athena Owl Stackable Coins in this listing are available in BU condition. Coins in this condition have no indications of wear and tear from handling, but there is the potential for minor production flaws to exist. These flaws range from breaks in the luster and spotted surfaces to contact marks.

On the obverse of all Silver Niue Athena Owl Stackable Coins is the image of Queen Elizabeth II. This right-profile portrait is the fourth-generation design of Her Majesty during her long reign as Queen of England, and it was created in 1998 by Ian Rank-Broadley.

The reverse of the 2018 1 oz Silver Niue Athena Owl Stackable Coin includes the design of the Owl of Athena. This design is one of the most significant in human coinage because it was actually used on a Greek coin known as the tetradrachm. This silver coin featured the owl in right-profile relief and the “AOE” engraving.

Additionally, these 2018 1 oz Silver Niue Athena Owl Stackable Coins have alternating raised and lowered edges on both sides. This enables you to securely stack your coins with a more stable connection between the coins as they are stacked or packaged.

Please don’t hesitate to contact Silver.com with questions about our silver coins. You can call us at 888-989-7223, chat with us live online, or simply email us.