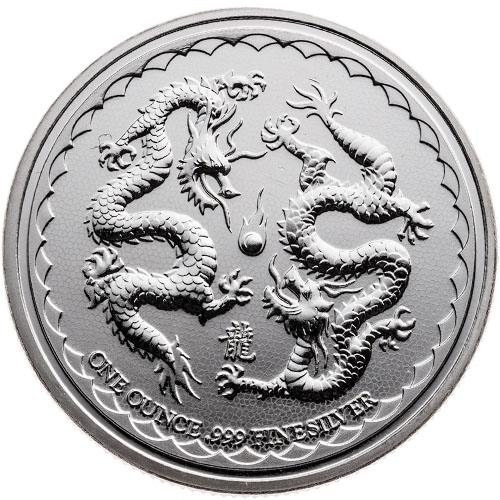 In a brand-new release for the South Pacific nation of Niue, the Double Dragon arrives from the New Zealand Mint. China’s revered symbol is as ancient as the culture in the People’s Republic of China itself, and the dragon has featured for thousands of years in cultural, artistic, and government designs, symbols, and emblems. The 2018 1 oz Silver Niue Double Dragon Coin is currently available to you online at Silver.com.

The South Pacific island of Niue is located some 1,500 miles northeast of New Zealand, and frequently works with the New Zealand Mint to produce beautiful silver bullion coins for investors and collectors. Niue’s land area is small at just 101 square miles, but it is one of the world’s largest coral islands.

From the nation known as the “Rock of Polynesia” comes the new Silver Double Dragon Coin collection. Included in the Double Dragon design release is a 1 oz silver coin and a 5 oz silver coin, both featuring the same impressive design of two dragons circling a flaming pearl on the reverse side.

Both the 2018 1 oz Silver Niue Double Dragon Coin and its 5 oz counterpart feature a beautiful framing design element on both sides. Known as a reverse-scalloped frame, this image is meant to mimic the look of a dragon’s scales.

The reverse of the 2018 1 oz Silver Niue Double Dragon Coin includes the new design elements created for this release. On this side you’ll find two dragons on the coin’s surface, one on either side of a flaming pearl in the center. Dragons represent strength and power, while the pearl is a symbol of immortality, wisdom, prosperity, and energy.

On the obverse of all Silver Niue Double Dragon Coins is the effigy of Queen Elizabeth II. Her Majesty is the longest-reigning monarch in British history, and she is featured here in a fourth-generation depiction created in 1998 by Ian Rank-Broadley.

The New Zealand Mint is a private minting operation located in Auckland, New Zealand. The mint has no official connection with the nation, which coins its currency and prints banknotes with the assistance of the Royal Mint and Royal Canadian Mint.

We encourage Silver.com customers to contact us on the phone at 888-989-7223 with questions. You can also connect with us online through our live chat and email address.