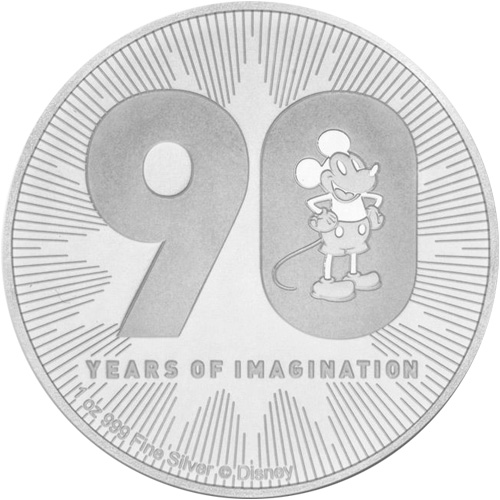 Few television or film characters have enjoyed the longevity of Mickey Mouse. While human actors are limited by their own lifetime, as an animated character Mickey Mouse has entertained generations of Americans and others around the globe for nearly a century. Since 1928, children have grown up with Mickey Mouse in theaters and on TV in their homes. Today, 2018 1 oz Silver Niue Mickey Mouse 90th Anniversary Coins are available to you online at Silver.com.

Mickey Mouse was created by Ub Iwerks and Walt Disney in 1928 to replace a previous animated character the two had created. Oswald the Lucky Rabbit bore similar features to Mickey Mouse, but never gained the popularity of the world’s most beloved mouse. In 1928, Mickey made his debut in an animated short featured in the iconic film Steamboat Willie.

All 2018 1 oz Silver Niue Mickey Mouse 90th Anniversary Coins are available in Brilliant Uncirculated condition with individual and bulk options available to purchase. The coins are housed in individual protective packaging or bulk options of mint tubes and Monster Boxes. The mint tubes contain 25 coins per tube and the Monster Box has a total of 250 silver coins housed within 10 different tubes.

On the reverse side of 2018 1 oz Silver Niue Mickey Mouse 90th Anniversary Coins is the phrase “90 Years of Imagination.” The digits “90” are in large font with Mickey Mouse inside of the “0” in the design. Mickey Mouse has become an instantly recognizable symbol around the world with his red shorts, yellow shoes, and white gloves in all designs.

Mickey Mouse featured in the animated short Plane Crazy in 1928 which appeared in the film Steamboat Willie. The animated short marked Mickey’s debut and the greater film was among the first to feature coordinated sound integrated into the film.

The obverse of 2018 Silver Niue Mickey Mouse 90th Anniversary Coins features the right-profile portrait of Queen Elizabeth II. The longest-reigning monarch in British history, Elizabeth II has been Queen of England since 1952 and is depicted here in the fourth-generation design for British and Commonwealth coinage. This was created in 1998 by Ian Rank-Broadley.

Please feel free to reach out to Silver.com if you have any questions. You can call us on the phone at 888-989-7223, chat with us live online, or simply email us with your inquiries.