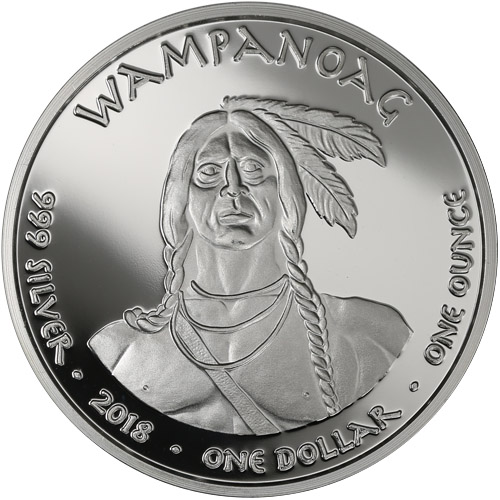 The Proof Native American Dollar Coin Series is a vast collection of silver coins for sale from the Native American Mint. This collection focuses on the indigenous tribes of North America and their traditional homelands, with each coin issued representing a different tribe and reflective of the modern state those people historically called home prior to European colonization. Right now, 2018 1 oz Proof Silver Rhode Island Wampanoag Shark Coins are available to purchase online at Silver.com.

Each of the 2018 1 oz Proof Silver Rhode Island Wampanoag Shark Coins in this collection has a proof finish. The coins have visual elements that include frosted, matte finishes on the design features and a mirrored, clear background field. Each one ships inside of a protective capsule to secure the design and condition for years to come.

The Wampanoag tribe was a loose confederacy of several tribes living in the New England area of the United States in the 1600s and 1700s. War and disease decimated the tribe long before the formation of the United States. An outbreak of leptospirosis or 7-day fever, between 1615 and 1619 decimated the population. King Philip’s War in 1675 and 1676 wiped out as much as 40% of the remaining tribe.

The reverse of all Proof Rhode Island Wampanoag Shark Coins features the design of a catshark. This species is a bottom feeder found up and down the Atlantic seaboard of North America. It is particularly common along the coastline of Massachusetts because it prefers shallow, intertidal waters.

If you have any questions, please don’t hesitate to reach out to Silver.com. You can contact our customer service department at 888-989-7223, chat with us live online, or simply send us an email.