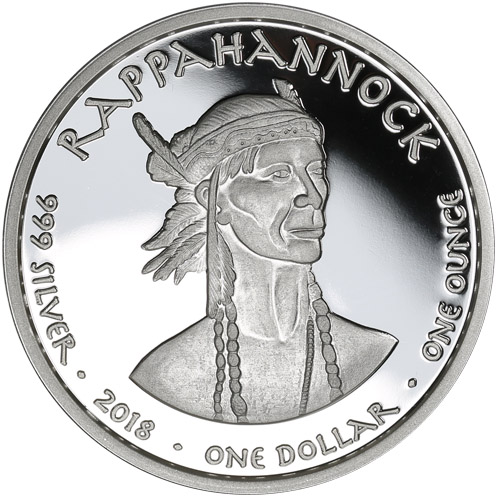 The Native American Proof Silver Dollar Coin Series was introduced in 2015 to celebrate connection of indigenous tribes throughout North America to the lands which their ancestors called home for hundreds of years before the arrival of European settlers. The Rappahannock people number just a few hundred today but are no less deserving of representation in this stunning series. The 2018 oz Proof Silver Virginia Rappahannock Big Eared Bat Coins are currently available to purchase online today at Silver.com.

Rappahannock people number just 500 registered individuals in the tribe today. Many of today’s Rappahannock people are descended from various Algonquian-speaking tribes that merged together in the 17th century following the expansion of European settlements in the Virginia region around what is now known as the Rappahannock River Valley.

When the first European settlers from Britain made landfall in what is now known as Virginia, the Rappahannock were among the first indigenous tribes they’d encounter. In fact, Rappahannock people living in the region would set out to encounter the Europeans after hearing of their explorations on the James River near what became the settlement of Jamestown, the first British settlement in the New World.

On the obverse of the 2018 1 oz Proof Silver Virginia Rappahannock Big Eared Bat Coin is the image of a tribal member, along with important engravings such as the weight, purity, and metal content of the coin, along with a face value.

The reverse of Proof Silver Virginia Rappahannock Big Eared Bat Coins features the namesake creature. The average big-eared bat of this species grows to a length of around 4 inches with an astonishing wingspan of roughly 11 inches.

We encourage Silver.com customers to reach out to us with questions at 888-989-7223. You can also connect with us online through our live chat and email address. Don’t forget to check the latest silver price per ounce on our website as you shop!