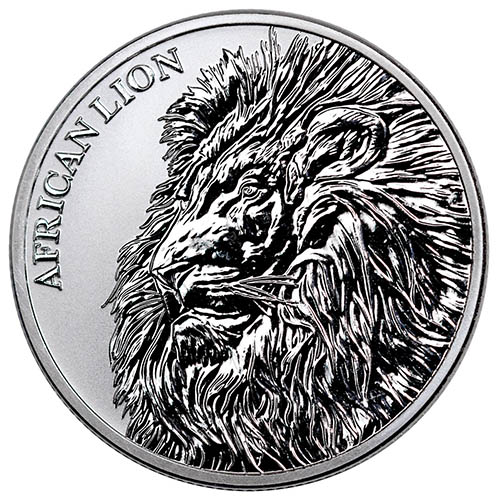 The Silver African Lion coins are an exciting option for any investor who likes to buy silver. These coins are available with a new reverse design feature each year and are often issued by different nations from Central Africa, with three different issuing nations in the first four years of availability. Right now, 2018 1 oz Silver Republic of Chad Lion Coins are available to purchase online at Silver.com.

Each of the 2018 1 oz Silver Republic of Chad Lion Coins available to you here today at Silver.com comes with protective plastic to house the coin. Each one is in Brilliant Uncirculated condition and represents the fourth new design in the collection.

For the third issue in 2017, the Republic of Chad was the issuing nation for the first time. This unique design depicted only a lioness stalking its prey. The 2018 Silver Republic of Chad Lion Coin is the first to feature a repeat nation of issue, though it does feature a new design once again on the reverse.

The reverse of 2018 1 oz Silver Republic of Chad Lion Coins includes the design of just a male lion. The massive and powerful leader of the pride, the family unit of lions, is depicted with his large mane dominating most of the field.

On the obverse of 2018 Silver Republic of Chad Lion Coins, you’ll find the outline of the entire African continent as depicted throughout the series. For this second release by the Republic of Chad, the nation of Chad is highlighted as a mirrored surface within the otherwise matte finish of the continental map.

If you have any questions, please feel free to contact Silver.com. Our customer service team is available to you at 888-989-7223, online using our live chat service, and via our email address.