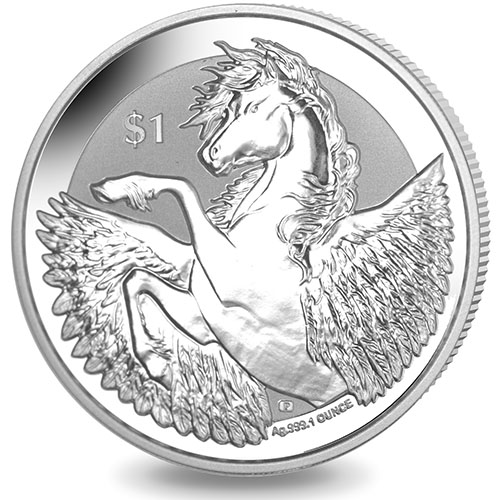 Any quantity available for $8.59 per oz over spot!

There’s a new 1 oz silver coin available to bullion investors, and this one also happens to mark a first-ever issue for the British Virgin Islands. A territory of the United Kingdom located in the Caribbean Sea, the British Virgin Islands consists of four major islands and 50 smaller islands or cays. Today, the 2018 1 oz Silver Reverse Frosted Pegasus Coin is available to you online at Silver.com.

Pegasus was the world’s only horse with wings, capable of flying high and fast. That is, of course, according to ancient Greek mythology. The Pegasus was granted to the demi-god (half mortal human, half immortal god) Perseus after he defeated Medusa. It is said that Medusa, one of the three legendary Gorgons, was the source of Pegasus. When Perseus beheaded her, Pegasus was born from the blood of the Gorgon.

The Pegasus is often depicted in mythology as a white creature with massive, beautiful wings. With a good heart and calm nature, Perseus was the only individual to ride Pegasus as others could not tame the magnificent flying horse.

All 2018 1 oz Silver Reverse Frosted Pegasus Coins in this listing are in BU condition. Coins in BU condition show no signs of wear and tear from handling, but can feature minor flaws from the production process. These flaws are limited in nature to breaks in the luster, spotted surfaces, or contact marks.

The reverse of the Silver Reverse Frosted Pegasus Coin includes the new design of the horse for 2018. Pegasus is featured here by himself, standing on his hind legs with his front legs raised high in the sky and his wings spread out to their max behind his figure.

On the obverse of the 2018 1 oz Silver Reverse Frosted Pegasus Coin is the right-profile portrait of Queen Elizabeth II. Her Majesty’s effigy features on all British, commonwealth, and territorial coinage. This effigy is an exclusive design used by Pobjoy Mint as indicated by the presence of a “PM” mint mark below the bust of the Queen.

Pobjoy Mint is located in Surrey, England, just outside of London. The mint was founded by the Pobjoy Family in 1965 and is the largest private mint currently operating in Europe.