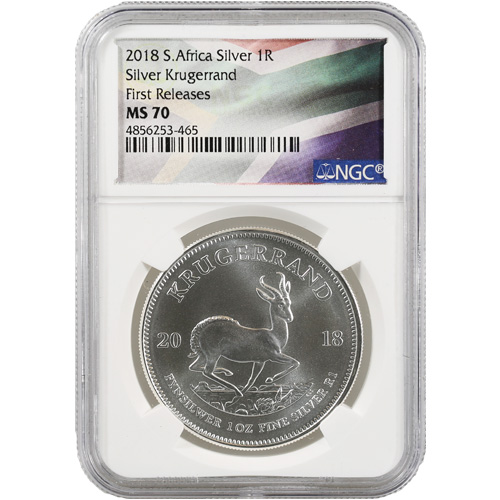 The Gold Krugerrand coin debuted in 1967 with a 1 oz gold option. The series expanded in the 1980s to include several fractional-ounce gold coins. It wasn’t until the 21st century that the Rand Refinery and the South African Mint introduced a silver bullion coin in the series. Following the 50th-anniversary release in 2017, the mint made the silver coin a regular issue in 2018.

All of these 2018 1 oz Silver South African Krugerrands are available to you for purchase online from Silver.com in perfect condition. Coins with a Mint State 70 certification are available to you with full, original mint luster and have no detracting flaws of any kind on the surface areas or fields of the coins. First Release coins are specimens received by the NGC for grading within 30 days of the original release date.

On the obverse of 2018 Silver South African Krugerrands is a depiction of Paul Kruger. The first president of the South African Republic, the Krugerrand series is named in his honor. The bullion coins offer a combination of President Kruger’s last name, Kruger, with the national fiat currency, Rand.

The reverse side of 2018 1 oz Silver Krugerrands features the image of a Springbok antelope. The national animal of the modern Republic of South Africa, the Springbok made its debut on national currency in the 1930s and has featured on the coinage of the South African Mint since the 1930s.

Silver.com customer service is available to assist you with any questions. Please call us at 888-989-7223, online using our live chat, and via our email address.