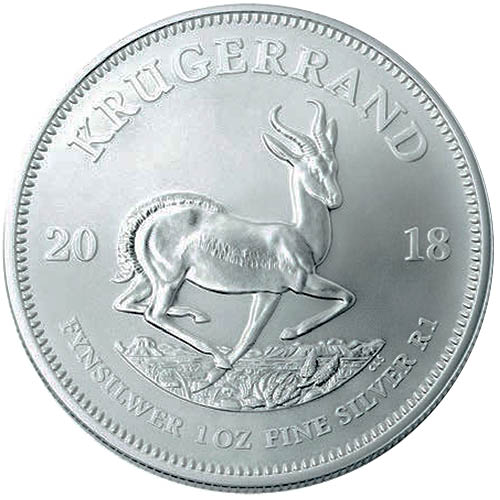 The 2017 issue year for the South African Mint included its first-ever Krugerrand coin struck in silver. The Gold Krugerrand captured the imagination of investors 51 years ago when it debuted in 1967 as the first gold bullion coin, and following its 50th-anniversary celebration, the coin is as popular as ever. Today, 2018 1 oz Silver South African Krugerrand Coins are available to you online at Silver.com.

Krugerrand coinage is so-named through the combination of the man whose effigy appears on the obverse and the national fiat currency of South Africa. Circulation coins in South Africa are issued in the Rand denomination. Paul Kruger was an influential Boer from the late 19th century. His last name was combined with the fiat currency to form Krugerrand, though the Gold and Silver Krugerrand coins have no marked denomination on them.

The obverse side of the 2018 1 oz Silver South African Krugerrand Coin features the left-profile portrait of Paul Kruger. He served as President of the South African Republic through the 1880s and to the turn of the 20th century but would live out his life in exile away from his home country.

On the reverse side of 2018 Silver South African Krugerrand Coins, you’ll find the image of a Springbok antelope. The Springbok is the official symbol of South Africa and can be found throughout the country and the other nations occupying the southern reaches of the African continent.

Please feel free to reach out to Silver.com if you have any questions about buying silver. You can reach us on the phone at 888-989-7223, chat with us live online, or simply send us an email with your inquiries.