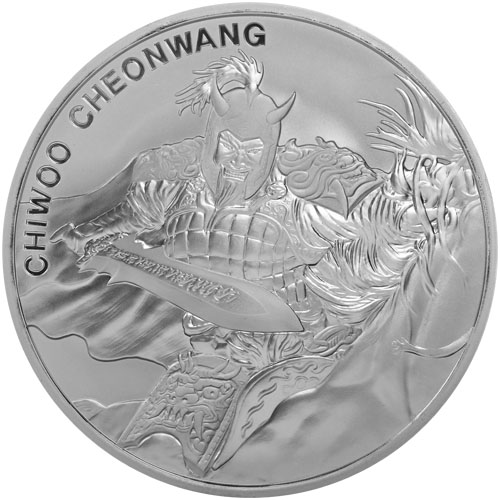 KOMSCO’s new Silver Chiwoo Cheonwang Series enters its third year of availability with the 2018 release, and in keeping with recent years there is yet another new reverse design available in the series. The collection focuses on Chiwoo Cheonwang, a real-life tribal leader who earned mythical status as a God of War. The 2018 1 oz Silver South Korean Chiwoo Cheonwang is now available to you online for purchase at Silver.com.

Chiwoo Cheonwang is largely remembered today as a mythical individual, the God of War. His exploits on the field of war, such as breathing fog to obscure the vision of his enemies and controlling the weather to benefit his armies, earned him mythical status. However, he was a real tribal leader in China who is considered one of the founding fathers of that nation.

For the South Korean people, Chiwoo Cheonwang’s imposing facial features form the mask for the Red Devils. This group of rabid fans supports the Korean national soccer team and formed in 2002 during the nation’s improbable run to the semifinals of the 2002 World Cup.

This is the third release of the Silver South Korean Chiwoo Cheonwang. KOMSCO has again altered the reverse image of Chiwoo Cheonwang, which not only adds to the collectible nature of this silver bullion coin, but also serves a purpose of continuing the story of his battlefield triumphs.

On the reverse of the 2018 1 oz Silver South Korean Chiwoo Cheonwang is the image of Chiwoo as he charges toward the enemy lines. His facial features are clear and unobstructed as they’ve been in past issues of the coin. He wears his full battle regalia, a long cape, and holds a massive sword in his left hand to smite his foes.

The obverse of the Silver Chiwoo Cheonwang features the image of Do ggae bi. This creature is known to the people of South Korea much in the same way as the hob goblin of Western culture. However, his ugly appearance serves the purpose of warding off evil spirits. Korean people would hang his image from roof tiles to help keep spirits away from the home that would do those inside any harm.

Your 2018 1 oz Silver South Korean Chiwoo Cheonwang is available today in BU condition. Products in this condition show no wear and tear, but there is the possibility of minor flaws from the striking of blanks. These flaws are limited to breaks in the luster, spotted surfaces, and contact marks.