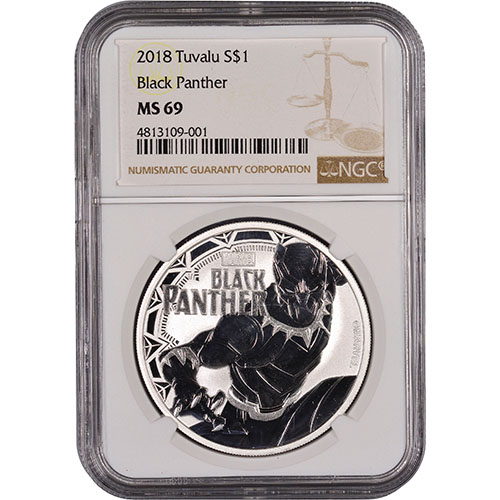 Launched in 2017 with the Spiderman coin, the new Marvel Series of silver coins from Perth Mint brings the characters of the Marvel Universe to life with original comic visuals as created by Stan Lee and Jack Kirby. The third release in this series was the Black Panther coin. The 2018 1 oz Silver Tuvalu Black Panther Marvel Series Coin is available to you for purchase online today at Silver.com with NGC certification.

When Black Panther, also known by his real name of T’Challa, debuted in American mainstream comics in 1966 he became the first superhero of African descent to appear in comics. Black Panther arrived earlier than other African-American superheroes in comics, including Falcon (1969), Luke Cage (1972), and Blade (1973).

Recently, Chadwick Boseman has taken center stage portraying Black Panther on the big screen. He played the role of Black Panther in the 2016 mega-hit Captain America: Civil War. In addition to his leading role in the solo film Black Panther in 2018, Boseman will reprise the role again later in 2018 in Avengers: Infinity War.

On the reverse of the 2018 1 oz Silver Tuvalu Black Panther Marvel Series Coin you find the image of Black Panther along with engravings of “Marvel” and “Black Panther.” T’Challa is the fictional king and ruler of the nation of Wakanda, itself a fictional location.

The obverse of the Silver Tuvalu Black Panther Coin bears the effigy of Queen Elizabeth II. Featured in right-profile relief, this fourth-generation portrait of the Queen comes from Ian Rank-Broadley and was created in 1998. This side includes engravings of “Queen Elizabeth II,” “Tuvalu 1 Dollar,” and “1 oz 9999 Ag 2018.”

Your purchase of a 2018 1 oz Silver Tuvalu Black Panther Marvel Series Coin today includes a Mint State 69 certification from the NGC. Coins in this condition are near-perfect, with full, original mint luster and a maximum of two minor detracting flaws. Common minor flaws include minuscule hairlines and contact marks.

We encourage Silver.com customers to contact us with questions at 888-989-7223. You can also reach out to us on the web through our live chat service and email address. The price of silver per ounce is also featured on our website at all times.