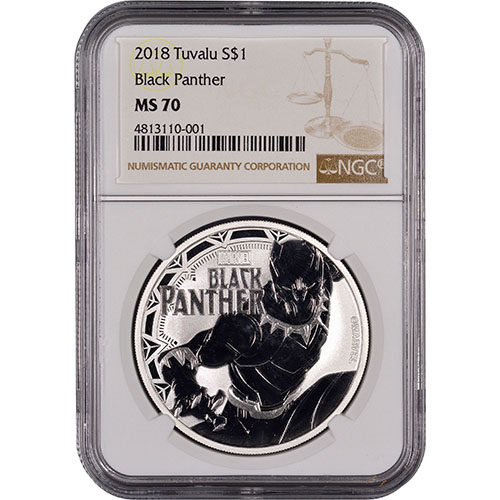 The Perth Mint is joining the comic craze with an impressive new series of silver bullion coins which bear the images of Marvel Comic superheroes. The six-coin series launched in 2017 and has already moved on to its third release with the massively popular image of Black Panther. Today, 2018 1 oz Silver Tuvalu Black Panther Marvel Series Coins are available to you online at Silver.com in perfect condition!

Marvel Comics Universe has dominated the box office in the United States and around the globe in recent years, which means it’s no surprise that the popular superheroes have come to precious metal coins as well. Black Panther was recently released on the big screen, and through its first 33 days has grossed $530.8 million in the US and over $1 billion when global ticket sales are factored in.

The film follows the exploits of T’Challa, the king of Wakanda and man behind the mask who takes on bad guys as the Black Panther. Leader of the mythical African nation, Black Panther was the first superhero of African descent in American comics when he debuted in 1966.

All 2018 1 oz Silver Tuvalu Black Panther Marvel Series Coins issued by the Perth Mint and available here today at Silver.com are in perfect condition. The NGC issued Mint State 70 certifications to these coins because each one shows full, original mint luster and lacks all detracting flaws.

The obverse of the Silver Tuvalu Black Panther Coin bears the right-profile portrait of Queen Elizabeth II. Her Majesty is found here in a fourth-generation depiction created in 1998 by Ian Rank-Broadley, offering a portrait of the Queen which was formerly used on British coins and remains in use across many commonwealth nations.

On the reverse of the 2018 1 oz Silver Tuvalu Black Panther Marvel Series Coins is Black Panther’s image. This superhero debuted in 1966 in an issue of Fantastic Four which was released in July. Artist-creator Stan Lee and writer-artist Jack Kirby developed the Black Panther character for Marvel.

Please feel free to reach out to Silver.com customer service with your questions. You can reach our team members on the phone at 888-989-7223, chat with us live online, or simply send us an email.