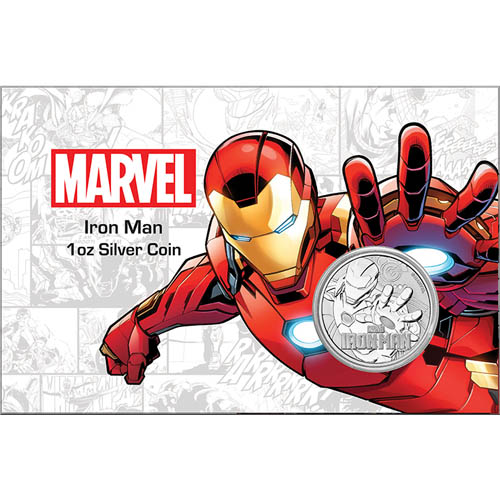 If you look into the background of Marvel Comics superheroes, you’ll find that some of those characters have suspicious or otherwise tawdry histories. While their alter ego works hard to save the world from evil, their real persona is often a flawed individual in one way or another. Among the earliest Marvel superheroes was Iron Man, a figure whose role in modern feature films has been larger than any other from Marvel Comics. Today, 2018 1 oz Silver Tuvalu Iron Man Marvel Series Coins are available to you online at Silver.com.

When trouble arises, Iron Man is there to protect the world with his technologically advanced suit. Outside of that suit, Iron Man is Anthony Edward “Tony” Stark, a billionaire playboy, business magnate, and brilliant scientist. Stark developed his mechanized suit of armor, at first, to serve his own needs following a severe chest injury during a kidnapping. He eventually realizes that he can use it to serve the common good as well.

All 2018 1 oz Silver Tuvalu Iron Man Marvel Series Coins in this listing come to you with a blister pack card that seals in the coin. Each of the cards includes colorized artwork on the obverse with the coin’s reverse design packaged to show on the same side. The reverse side of the card lists the weight, purity, metal content, total mintage, and date mark of the coin.

On the reverse of 2018 Silver Tuvalu Iron Man Marvel Series Coins is a depiction of Tony Stark in his powerful Iron Man suit. Robert Downey Jr. has stepped into the role of Iron Man in Marvel Cinematic Universe feature films an astonishing 10 times, including in three separate installments of Iron Man feature films.

The obverse of 2018 1 oz Silver Tuvalu Iron Man Marvel Series Coins includes a bust of Queen Elizabeth II. This iconic portrait was created in 1998 by Ian Rank-Broadley for use on Royal Mint of England coins, and has since been used on countless Commonwealth coins from Australia and New Zealand to Niue and Tuvalu.

Please feel free to reach out to Silver.com with your questions when buying silver. You can call us at 888-989-7223, chat with us live online, or email us directly.