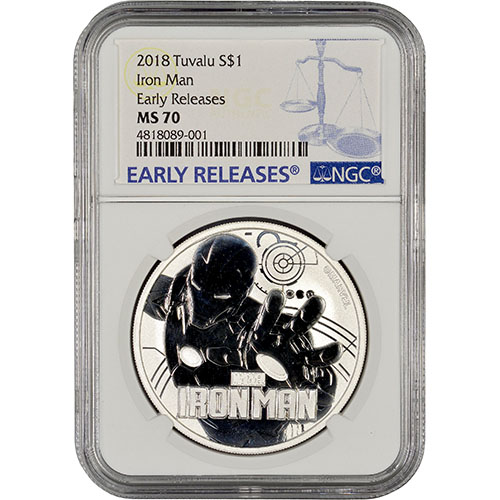 The Perth Mint’s Marvel Series focuses its design themes on the superheroes from the Marvel Cinematic Universe. The silver coin series debuted with the Spiderman design and has featured other popular superheroes from the comics and recent box-office hits. The 2018 1 oz Silver Tuvalu Iron Man Marvel Series Coins are currently available to purchase online at Silver.com.

Anthony Edward “Tony” Stark is a wealthy American magnate and playboy whose ingenious nature in the science lab helped save his own life. The head of Stark Industries, he was kidnapped by evil forces looking for his help in building a weapon of mass destruction. He instead created a powered suit of armor that helped save his life and ensure his escape from captivity.

Created by Stan Lee and Larry Lieber, Iron Man debuted in Tales of Suspense in March 1963. Iron Man burst onto the big screen in a big way in 2008 with the feature film debut of one of Marvel Cinematic Universe’s most popular characters. Portrayed in films by Robert Downy Jr., Iron Man has appeared in seven subsequent films and one further film scheduled for a 2019 release.

On the obverse of the Silver Tuvalu Iron Man Marvel Series Coins, you’ll find the effigy of Queen Elizabeth II. Her Majesty is shown here in a fourth-generation design created in 1998 by Ian Rank-Broadley.

The reverse side of the coins includes the image of Iron Man as originally created by Stan Lee, Larry Lieber, Don Heck, and Jack Kirby. The Iron Man feature film of 2008 was massively successful and lead to the releases of Iron Man 2 and Iron Man 3 in 2010 and 2013, respectively.

2018 1 oz Silver Tuvalu Iron Man Marvel Series Coins are available to you here today in near-perfect condition according to the NGC. Coins with a Mint State 69 certification feature full, original mint luster and a maximum of two minor detracting flaws. The Early Release label included with purchase indicates the NGC received the coins in 2018 within 30 days of their release date from the Perth Mint.