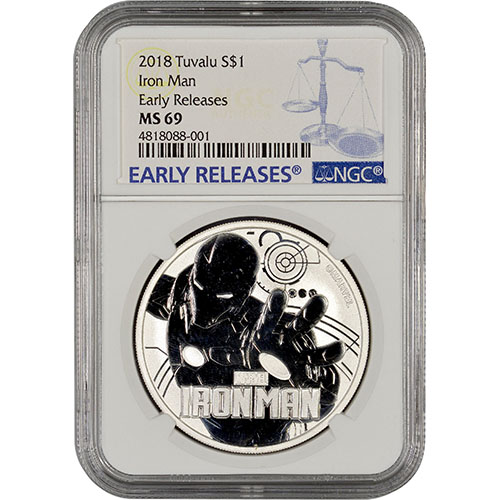 In the Marvel Series from Perth Mint, six of the most popular superheroes from Marvel Comics appear on the reverse face of a silver bullion coin series. The first design was that of Spiderman and was issued in conjunction with a new Spiderman feature film. Subsequent releases have followed a similar pattern. Right now, 2018 1 oz Silver Tuvalu Iron Man Marvel Series Coins are available to purchase online at Silver.com.

Each 2018 1 oz Silver Tuvalu Iron Man Marvel Series Coin is available to you for purchase today with a perfect certification. The Mint State 70 certification from the NGC indicates the coins exhibit full, original mint luster with no detracting flaws of any kind. The Early Release label is reserved for coins which arrive for certification within the first 30 days of their 2018 release date by the Perth Mint.

Tony Stark, the playboy and business magnate in charge of Stark Industries, is the man behind the armored suit in Iron Man comics. Actor Robert Downey Jr. has portrayed Iron Man in feature films since the 2008 release of Iron Man. Subsequent feature film appearances by Downey Jr. in the Iron Man suit included Iron Man sequels in 2010 and 2013, Avengers films in 2012, 2015, and 2018, as well as Captain America: Civil War (2016) and Spider-Man: Homecoming (2017).

On the reverse of the 2018 1 oz Silver Tuvalu Iron Man Marvel Series coin is the image of Iron Man in flight. This coin and its design were issued in conjunction with the 2018 release of Avengers: Infinity War in which Downey Jr. once again reprised his role as Iron Man.

The obverse of the 2018 1 oz Silver Iron Man Marvel Series Coin features the right-profile portrait of Queen Elizabeth II. The longest-reigning monarch in the history of the United Kingdom, Her Majesty is depicted here in the fourth-generation design created for the Royal Mint of England in 1998 by Ian Rank-Broadley.