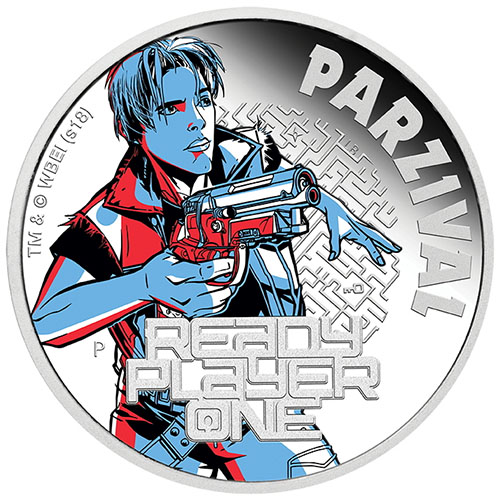 The 2018 release of Ready Player One brings one of the most talked-about new science-fiction novels to life on the big screen. Set in a dystopian future when society is collapsing and humanity is losing faith, a single billionaire gives the people an escape of sorts in the form of the virtual world known as Oasis.

Directed by Steven Spielberg, the film is based on the hit 2011 novel of the same name written by Ernest Cline. The American author released Ready Player One as his debut novel and it was met with extreme interest. In the main storyline, characters compete to find a treasured “egg” in the virtual world of Oasis, put there by its billionaire designer before his death. The contest to find it is intense as the winner inherits his fortune.

On the obverse of the Silver Tuvalu Ready Player One Series Coins you’ll find the familiar portrait of Queen Elizabeth II. Her Majesty features on the obverse of all Australian coinage, with this particular design serving as the fourth-generation effigy. It was created in 1998 by Ian Rank-Broadley for initial use on British coinage.

The reverse of the 2018 1 oz Silver Tuvalu Ready Player One Parzival Coin features the colorized image of one of the film’s main characters. Parzival is the avatar used within the Oasis virtual world by Wade Watts. He is depicted with blue skin and shades of red to offset the coloring, and he holds a gun that he uses to defend himself against other “gunters,” or egg hunters within Oasis.

All coins in this series will ship inside of clear acrylic cases. The cases enable dual-sided viewing of the coins while on display. Each case ships in a Ready Player One-themed shipping box and features a numbered Certificate of Authenticity.