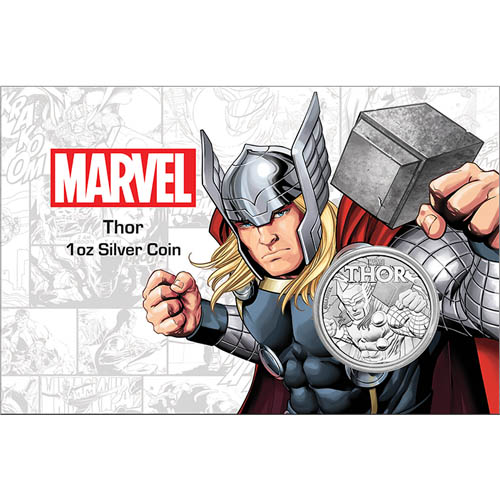 One of the many superhero designs available from the Marvel Series at the Perth Mint to feature with special blister pack cards is the 2018 Thor Coin. Introduced as the second coin in the collection and the first of the 2018 release schedule, Thor depicts the Norse god turned superhero who wields a powerful hammer to fight the forces of evil. Now, the 2018 1 oz Silver Tuvalu Thor Marvel Series Coin is available to you for purchase online at Silver.com.

Germanic and Norse mythologies offer accounts of a hammer-wielding god associated with storms. The individual controls lightning and thunder, brews storms, and has the strength of an oak tree. His name was Thor and he actually originated among Germanic people from the periods prior to and after colonization by the Roman Empire.

As the empire crumbled and the Migration Period pushed tribal peoples into the north, Thor’s popularity grew during the Viking Age and became closely associated with Norse mythology more so than its Germanic roots. Today, visions of Thor are closely associated with the actor Chris Hemsworth who has portrayed the mythological god in eight feature films and one upcoming release.

On the obverse of the 2018 Silver Tuvalu Thor Marvel Series coin is Queen Elizabeth II. This is the fourth-generation effigy of Her Majesty created for the Royal Mint of England in 1998 by Ian Rank-Broadley. It has featured prominently on British, Australian, and Commonwealth coins since that time.

The reverse of 2018 1 oz Silver Tuvalu Thor Marvel Series Coins includes a design honoring Thor. His famed hammer, Mjolnir, is depicted in the scene as well. Thor’s hammer gives him the ability to fly and manipulate the weather, among its primary benefits. Thor first appeared in Marvel Comics in August 1962 as Thor Odinson.

These 2018 1 oz Silver Tuvalu Thor Marvel Series Coins are available to you today in Brilliant Uncirculated condition. Each one comes in a blister pack card that includes the weight, purity, metal content, date mark, and mintage on the reverse, with the obverse featuring a full-color depiction of Thor from Marvel Comics.

We encourage Silver.com customers to call us with questions about buying silver at 888-989-7223. You can also connect with us using our live web chat and email address features.