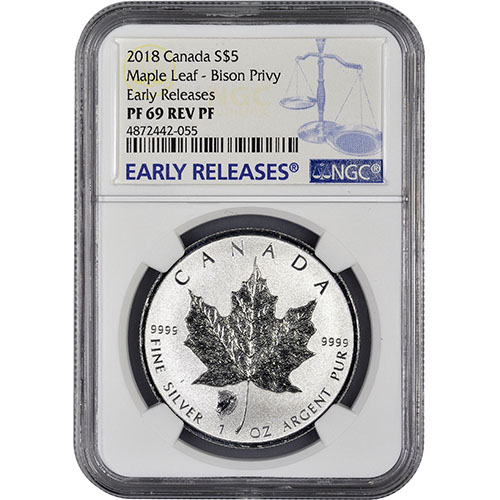 The Royal Canadian Mint has a reputation for creating silver bullion coin programs with a wildlife focus in the designs. The Canadian Wildlife Series was one of its most popular issues of the 21st century and it is now available with a twist in the Wild Canadian Series. Today, 2018 1 oz Wood Bison Privy Silver Canadian Maple Leaf Reverse Proof Coins are available to you online at Silver.com.

The Canadian Wildlife Series ran from 2011 to 2013 and featured six distinct designs. Each release was accompanied by the reverse design of a different wildlife species commonly found in the Canadian wilderness. The Royal Canadian Mint depicted the wolf, grizzly bear, cougar, moose, pronghorn antelope, and the wood bison.

The included Early Release label in the slab from the NGC means the coins arrived within a certain timeframe. The NGC issues the ER label to coins that arrived within the first 30 days of their release from the Royal Canadian Mint.

On the obverse of 2018 1 oz Wood Bison Privy Silver Canadian Maple Leaf Coins is the effigy of Queen Elizabeth II. Her Majesty is depicted here in right-profile relief without a crown on her head. This design was created in 2003 by Susanna Blunt and is the first monarch’s effigy since King George VI in the 1930s to feature without a crown.

The reverse of 2018 Wood Bison Privy Silver Canadian Maple Leaf Reverse Proof coins includes the image of the beloved national symbol, a sugar maple leaf. Included on this side is the privy mark of a wood bison, a smaller subspecies of the North American bison found mainly in the forested foothills of Canada. The coins in the Wild Canada Series are reverse proof issues with strong, frosted backgrounds and deeply-mirrored, clear design elements.

Please feel free to reach out to Silver.com with your questions. You can call our customer service team at 888-989-7223, chat with us live online, or simply send us an email.