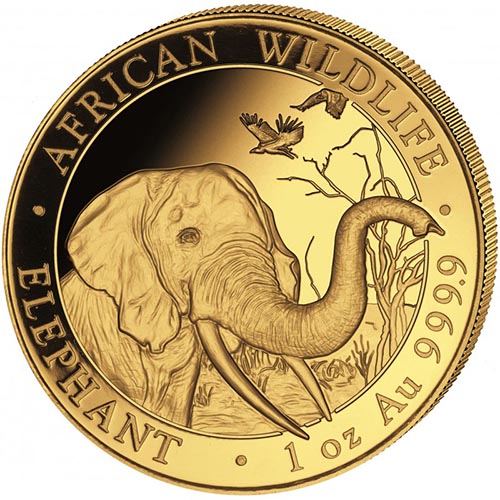 The Gold Somalian Elephant Coin is part of the larger African Wildlife Series of coins with an elephant design theme released annually by the Bavarian State Mint. The coins in this collection originated as a silver series for the nation of Zambia, but since 2004 have been issued for Somalia and grown in popularity and scope in the years since. Today, 2018 1 oz Gold Somalian Elephant Coins are available to you online at Silver.com.

The Silver and Gold Elephant coins from the Bavarian Mint are much different today than those originally introduced for Zambia in 1999, and even through the mid-2000s for Somalia. The coin program began with .999 fine silver and gold content, as well as extremely limited mintage figures early on.

In recent years, the program has expanded significantly to include .9999 fine silver and gold purity, more fractional weights in the silver series, more availability of sizes in the gold collection, and an entirely new Platinum Elephant option as well.

Each 2018 1 oz Gold Somalian Elephant Coin in this listing is available to you in BU condition. Coins in BU condition show no signs of wear and tear, though you will notice minor flaws possible on the surface. As a result of production, the coins occasionally have minor flaws such as breaks in the luster, spotted surfaces, and contact marks.

On the reverse of the 2018 1 oz Gold Somalian Elephant Coin you’ll find the coat of arms for Somalia. This symbol features the singular star found on the nation’s flag, with that star set against a backdrop of horizontal lines on a crown-topped shield supported on the sides by leopards.

Please feel free to reach out to Silver.com with questions. You can contact us on the phone at 888-989-7223, online using our live web chat, and via our email address. The price of gold and silver are available on our homepage throughout the day!