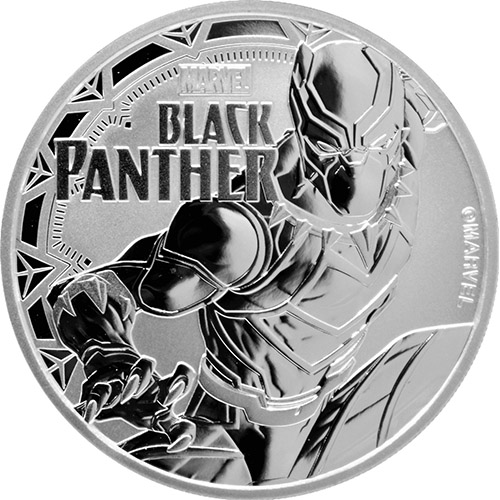 Marvel Comics has dominated the box office in recent years, and now the popular superhero characters are flexing some muscle in the precious metals industry. Numerous coins have been released, and the Black Panther first appeared in a Captain America: Civil War silver series. Now, T’Challa has his own coin in the Perth Mint Marvel Series. Today, 2018 1 oz Silver Tuvalu Black Panther Marvel Series Coins are available to purchase online at Silver.com.

Black Panther is known in Marvel Comics as T’Challa, the king and protector of a fictional African nation known as Wakanda. Black Panther uses his wealth to access advanced technologies to combat enemies, and possesses genius intellect, martial art skills, and is in tip-top physical condition.

All 2018 1 oz Silver Tuvalu Black Panther Marvel Series Coins listed here are in BU condition. Coins in this condition show no wear and tear, but do possess some minor flaws as a result of the production process. Those flaws are limited in nature to breaks in the luster, spotted surfaces, and contact marks.

The Black Panther character debuted in the Marvel Comic Fantastic Four, issue number 52. The debut came in July 1966 and made Black Panther the first superhero of African descent in mainstream American comics. Black Panther preceded the debuts of Falcon, Luke Cage, and John Stewart as Green Lantern in DC Comics.

On the obverse of all 2018 Silver Tuvalu Black Panther Marvel Series Coins you’ll find the effigy of Queen Elizabeth II. Her Majesty is captured in right-profile relief courtesy of Ian Rank-Broadley, who created this fourth-generation depiction in 1998.

The reverse of the 2018 1 oz Silver Black Panther Marvel Coin includes the image of the famed superhero. Black Panther recently appeared in Captain America: Civil War, and this coin’s release is timed to coincide with the upcoming February 2018 release of a Black Panther solo film.

Opened in 1899 as the third and final Royal Mint location in Australia, today the Perth Mint is the oldest in the country. It is not associated with the Royal Australian Mint in Canberra, and is owned by the state government of Western Australia. The price of silver today is regularly updated on our homepage throughout the day!

Please don’t hesitate to reach out to Silver.com if you have any questions. You can contact our customer service team on the phone at 888-989-7223, chat with us live online, or reach out to us via email.