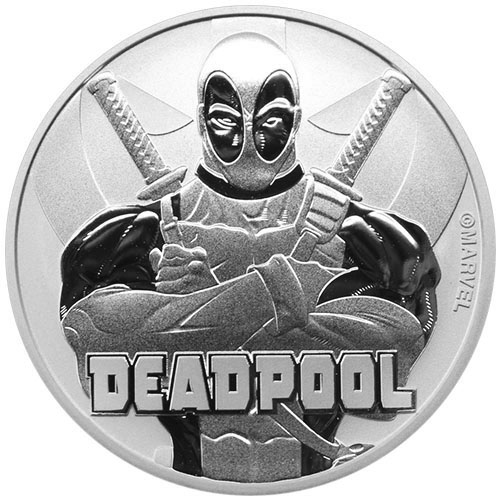 The Marvel Series of silver bullion coins from the Perth Mint includes a total of six planned designs. Introduced in 2017 with the Spiderman design, subsequent releases prior to the new Deadpool image include Thor, Black Panther, and Iron Man. The 2018 1 oz Silver Tuvalu Deadpool Marvel Series Coins are available to you for purchase online at Silver.com.

Each of the Marvel Series Coins from the Perth Mint has been timed to release near the same release date of a feature film with the character as the central figure. The collection started in 2017 with the Spiderman coin issued in time for the debut of the reboot of the Spiderman franchise at Marvel Cinematic Universe.

Subsequent releases were timed to match the arrival in theaters of a feature film for Thor, the Black Panther standalone film, and the latest release of Iron Man and the Avengers. With Deadpool 2 having hit theaters in 2018, the Marvel Series now features the image of the wise-cracking anti-hero.

On the reverse of the 2018 1 oz Silver Tuvalu Deadpool Marvel Series Coins is the imposing image of the character known as Deadpool. His real name is Wade Winston Wilson, but he is known among fans as Deadpool. The character first appeared in comics in 1991 and featured in a series on TV in 2004 called Cable & Deadpool. The figure is a deeply disturbed and disfigured mercenary and assassin.

The obverse of the 2019 Silver Tuvalu Deadpool Marvel Series Coins features the image of Queen Elizabeth II. Her Majesty’s effigy on this face of the coin comes from Ian Rank-Broadley and was created for the Royal Mint in 1998.

We encourage you to reach out to Silver.com customers with questions at 888-989-7223. You can also contact us online through our live chat and email address features.