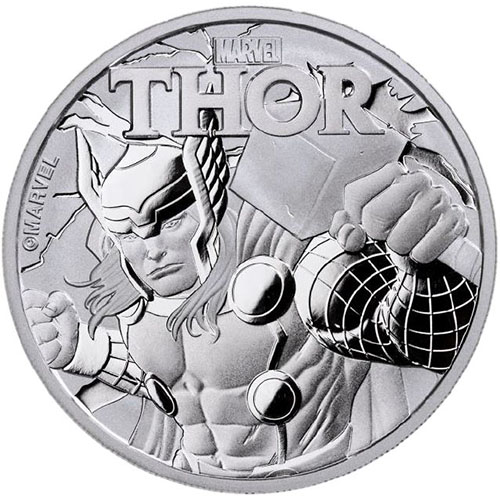 One of the most popular characters from the Marvel Comics universe is Thor. The Asgardian God is well known from Norse mythology, and in recent years Marvel Studios has brought the figure of Thor back to life on the big screen. Now Perth Mint is bringing him back to life as the second release in a new Marvel Series of silver coins for sale. Today, 2018 1 oz Silver Tuvalu Thor Marvel Series Coins are available to you online at Silver.com.

Thor is the son of the Father of Gods in Norse mythology, Odin. He wields a powerful hammer that only he can lift, and has the ability to control the weather among his many powers. Thor has featured prominently in Marvel Studios films throughout the 21st century, appearing in both films focused on him and as part of the Avengers series of releases.

Although most will look at Chris Hemsworth as the figure of Thor, classic comic book fans are more likely to recognize the character of Thor depicted on the 2018 1 oz Silver Tuvalu Thor Marvel Series Coin. This classic image of Thor is the one most of the world knows, and makes its appearance as the second coin in the Marvel Series from Perth Mint, following Spiderman as the debut issue in 2017.

All 2018 1 oz Silver Tuvalu Thor Marvel Series Coins are available in BU condition. Coins in this condition have no signs of wear and tear, though you may notice minor flaws ranging from breaks in the luster and spotted surfaces to contact marks. These are the result of production at the mint.

On the obverse of all Thor Marvel Series Coins is Queen Elizabeth II’s effigy. The Queen appears on all Australian coinage, and this particular design is the fourth-generation effigy used since 1952. It was created in 1998 by Ian Rank-Broadley.

The reverse of the 2018 1 oz Silver Tuvalu Thor Marvel Series Coin includes the image of Thor. This design captures Thor wielding his powerful hammer, known as Mjolnir, in his left hand. The background field has a lightning bolt effect and the coins’ finish includes a mix of smooth and textured surfaces.

Please don’t hesitate to contact Silver.com with questions at 888-989-7223. You can also reach us on the web using our live chat and email address.