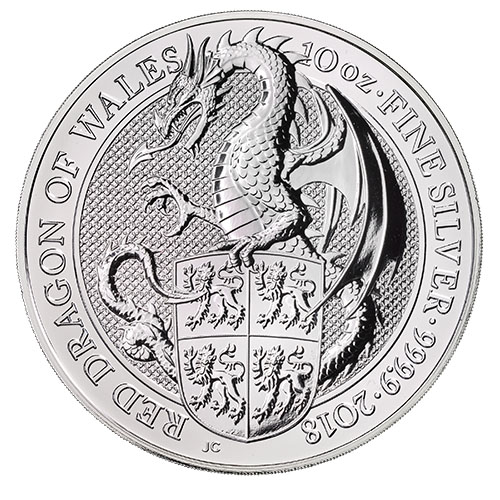 The Red Dragon of Wales is one of the most stunning creatures in the Queen’s Beast Collection. Originally introduced third in the series, the Red Dragon reappears in the 2018 bullion release cycle with the new platinum and 10 oz silver versions of the coins the Royal Mint introduced in the collection for 2017. Right now, 2018 10 oz Silver British Queen’s Beast Dragon Coins are available to purchase online at Silver.com.

Each of the 2018 10 oz Silver British Queen’s Beast Dragon Coins in this listing is available to you in BU condition. Coins in this condition are known as brilliant uncirculated and are free from signs of wear and tear. However, it is possible for minor flaws to exist after the coining process, such as breaks in the luster, spotted surfaces, and contact marks.

Owen Tudor used the Red Dragon as a badge of his house, and was the second husband of Catherine of Valois. She was the widow of Henry V and Tudor would become the grandfather of Henry VII, who would found the Tudor dynasty of monarchs in England. Henry VII carried on his grandfather’s red dragon as a standard in battle, while Henry VIII flew a red dragon on green and white for the flag on his ships.

The reverse of the 2018 10 oz Silver British Queen’s Beast Dragon Coin features the Red Dragon of Wales as it is depicted by Queen Elizabeth II, bearing the shield from the arms of Llewelyn ap Griffith. Queen Elizabeth II elevated the red dragon to the flag of Wales, while the arms of Llewelyn ap Griffith bear a quartered shield with four leopards.

On the obverse is Jody Clark’s fifth-generation depiction of Queen Elizabeth II. All 2018 Silver Queen’s Beast Coins bear the portrait of the monarch, who has featured on British coinage since her ascension to the throne in 1952.

The Royal Mint originally offered its Queen’s Beast Coins in 2 oz silver, ¼ oz gold, and 1 oz gold. As of 2017, all designs in the collection are expanded to include the new 10 oz silver bullion option and 1 oz platinum bullion option.

If you have any questions, don’t hesitate to ask. Silver.com customer service is available to you at 888-989-7223, online using our live chat, and via our email address.