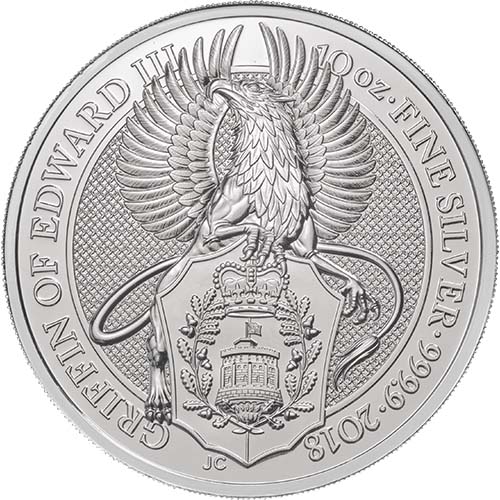 The Griffin of Edward III is the second creature to appear in the Royal Mint’s bullion issue of the Queen’s Beast Series. Introduced in 2016, the Queen’s Beast Series depicts each of the 10 heraldic beasts featured as carved statues during the coronation ceremony for Queen Elizabeth II in 1953. The 2018 10 oz Silver British Queen’s Beast Griffin Coin is now available to you for purchase online at Silver.com.

All coins in the Queen’s Beast Collection were designed by Jody Clark. At 33 years old, Jody Clark became the youngest Royal Mint engraver to create the effigy of the Queen for the obverse side of British coinage. His July 2015 depiction of Elizabeth II is the fifth-generation portrait of Her Majesty to appear on British coins.

The Griffin of Edward III was chosen by King Edward III himself for his personal seal. A mythical creature, the griffin was viewed as the King of all Beasts. Its figure features the body of a lion combined with the head, wings, and front claws of an eagle. The griffin first appeared in 2017 in the Queen’s Beast Series gold and silver coins as the second bullion release.

On the reverse of all 2018 10 oz Silver British Queen’s Beast Griffin Coins is the image of a majestic griffin, standing tall with its wings stretched high over its head. The griffin stands above the Round Tower, which is located at Windsor Castle where Edward III was born.

The obverse of the 2018 Silver British Queen’s Beast Griffin Coin features the common design of all British coinage. The right-profile portrait of Queen Elizabeth II appears on this side, and represents the fifth image of the Queen to appear since 1953 when the Queen officially became the monarch of Great Britain and the United Kingdom.

Each 2018 10 oz Silver British Queen’s Beast Griffin Coin in this listing is in BU condition. Coins in this condition have no signs of wear and tear, with the potential for minor flaws. These flaws result from striking blanks during production, and consist of possible breaks in the luster, spotted surfaces, and contact marks.

The Royal Mint was founded in the 8th century as the London Mint, and from the 12th century onward was the lone sovereign mint of the crown. Today, it is located in Wales and produces coinage for both the United Kingdom and 60 other countries around the globe.

We encourage Silver.com customers to contact us with questions. You can call us at 888-989-7223, chat with us live online, or simply send us an email with your inquiries.