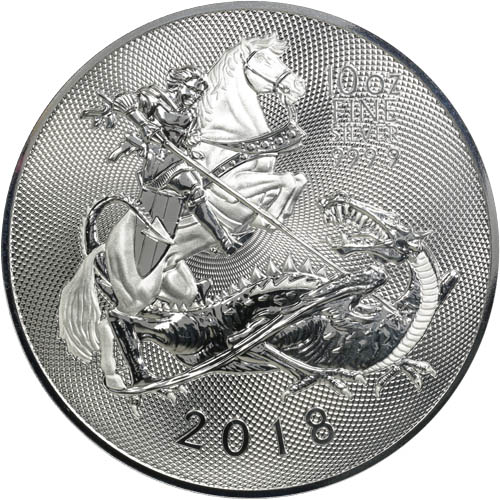 St. George is the Patron Saint of England and a respected saint within the Christian faith whose death came about because of his refusal to renounce his Christian faith and the existence of Jesus Christ. St. George and the dragon is a design that has featured prominently in British heraldry and coinage, and now a new design comes with a beautiful new 10 oz silver coin. Today, 2018 10 oz Silver British Valiant Coins are available to you online at Silver.com.

The man who would become St. George in the Christian faith was once a high-ranking officer in the Roman army of Greek descent. Emperor Diocletian gave St. George countless chances to renounce his faith and Jesus Christ, but even under the pain of unspeakable torture, he refused to turn from his beliefs. He was eventually beheaded for his faith and became a symbol of devotion to many early Christians.

All 2018 10 oz Silver British Valiant Coins from the Royal Mint mark the latest depiction of St. George and the dragon on British coinage. One of the most common uses of his image includes the Gold Sovereigns offered beginning in 1817. This latest depiction of St. George was created by Etienne Milner for the new Silver British Valiant coin and is the first-ever incuse design struck on a Royal Mint of England silver coin for sale.

On the reverse side of 2018 Silver British Valiant Coins, you’ll find a young and brave St. George as he rides to battle against a dragon. The dragon was a popular Medieval theme added to St. George’s legacy as a symbol of the devil and his temptation. It is believed that the hill upon which St. George slew the dragon has no grass growing as a result of the dragon’s blood spilled upon the mount.

The obverse of 2018 10 oz Silver British Valiant Coins is the effigy of Queen Elizabeth II. Designed in 2015 by Jody Clark for the Royal Mint, this is the fifth-generation effigy of Her Majesty and captures her at the age of 89.

Please feel free to reach out to us with your questions. You can call us at 888-989-7223, chat with us live online, or simply send us an email with your inquiries.