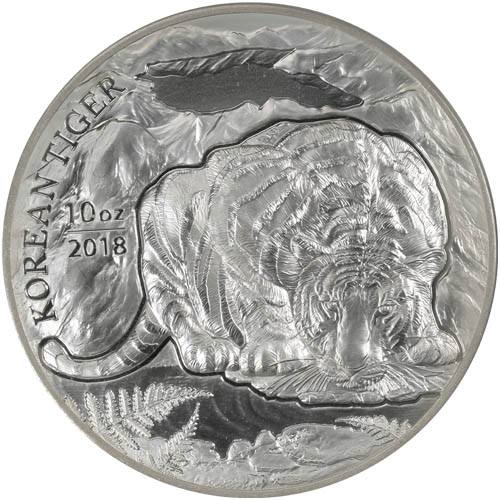 Most nations have an animal that is strongly associated with it on the international stage. Americans associate with the majesty of the bald eagle. Chinese society associates with the strength and mystical spirit of the dragon. For the people of South Korea, the tiger is a powerful symbol of the people and their culture. The 2018 10 oz Silver South Korean Tiger Medal is a new issue from KOMSCO and is currently available to you for purchase at Silver.com.

The Siberian tiger was historically the largest cat species in the world, though it has been surpassed in recent years by the Bengal tiger as modern Siberian populations struggle due to the encroachment of human populations and food sources that become scarcer by the year. The Siberian tiger has often gone by other names based on localized sightings.

For example, other names used for the species include Amur tiger, Manchurian tiger, Ussurian tiger, and Korean tiger. Though the tiger is a vital animal in Korean history and mythology, the beasts have not roamed the peninsula in almost 100 years. The historic range of the Siberian included Eastern Russia, Mongolia, China, and the peninsula, but the last wild Korean tiger is believed to have been killed in 1922.

On the obverse of 2018 10 oz Silver South Korean Tiger Medals is a distinct image in the collection. This design features a tiger crouched at the water’s edge as lush vegetation surrounds it on all sides.

The reverse face of 2018 Silver South Korean Tiger Medals features the artistic depiction of the Korean peninsula. Using the letters of the Korean alphabet, the artist has shaped them together to create the image of the peninsula without borders to separate North from South.

These 2018 10 oz Silver South Korean Tiger Medals are available to you in Brilliant Uncirculated condition and are housed within individual protective plastic capsules. KOMSCO, or the Korea Minting and Security Printing Corporation, produces the South Korean Tiger series of gold and silver for sale. Founded in 1951, it is a government-owned corporation responsible for the minting of banknotes and coins.

We encourage Silver.com customers to contact us with questions at 888-989-7223. You can also connect with us online through our live chat and email address options.