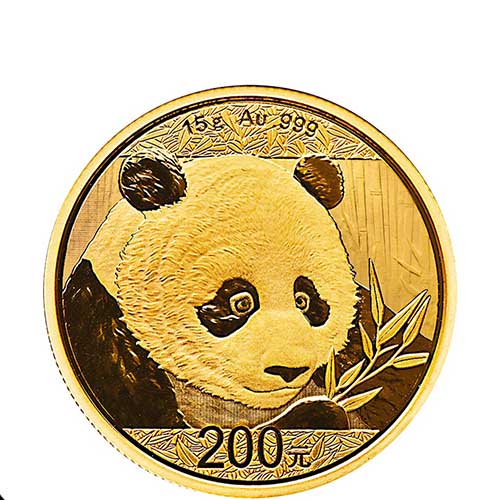 The gold bullion market is largely dominated by some of the most prominent gold coin programs. Among them you’ll find the Gold American Eagle, Gold Canadian Maple Leaf, Gold South African Krugerrand, and the Gold Chinese Panda. The latter coin is the third longest running gold series, behind only the Krugerrand and Maple Leaf. Today, 2018 15 Gram Gold Chinese Panda Coins are available to you online at Silver.com.

The Gold Chinese Panda coin is one of the few major bullion programs to use a rotating design on one side of its annual-release coins. Since 1982, the Chinese Mint has used a new depiction of the Giant Panda on the obverse side of the coin in each year, with one exception. The 2001 design of the panda was reused on the 2002 panda coin, making it the only time a repeat was used in the series.

Your 2018 15 Gram Gold Chinese Panda Coin purchased through this listing is in BU condition. Coins in this condition have no signs of wear and tear, though there are possible minor flaws from the coining process at the mint. These flaws range from breaks in the luster and spotted surfaces to contact marks.

On the reverse of 2018 15 Gram Gold Chinese Panda Coins is the image of the Hall of Prayer for Abundant Harvests. This building is the largest in the Temple of Heaven complex, which was completed in 1420 in the southeastern portion of modern-day central Beijing. Today, there are various other temple complexes around the Temple of Heaven.

The obverse of the Gold Chinese Panda Coin has the latest Giant Panda design on the coin. This year’s depiction focuses on a close-up image of the panda. A species of bear that is considered a basal member of the species, more closely related on the DNA level to raccoons than other bears, this image shows a Giant Panda with its eyes focused on a bamboo shoot.

All Gold Chinese Panda coins are produced by the Chinese Mint. With facilities in Shanghai, Shenyang, Shenzhen, and Beijing, the Chinese Mint produces coins under the authority of the People’s Bank of China across the country.

Please don’t hesitate to reach out to Silver.com with questions regarding these coins. You can call us at 888-989-7223, connect with us online through our live chat, or simply send us an email with your questions.