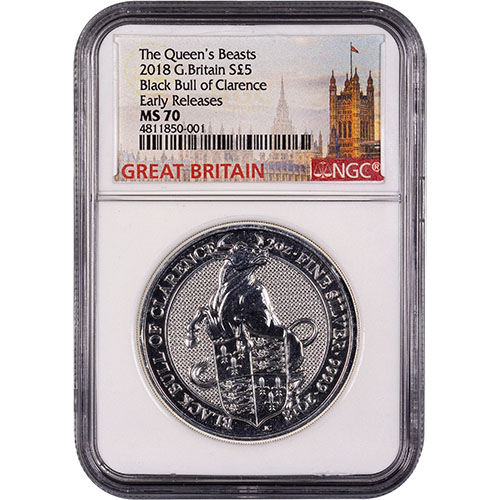 The Black Bull of Clarence came into the Royal Arms from King Edward IV, the first Yorkist King of England who launched 200 years of use for the Bull in the Royal Arms. The Yorkist kings used the Black Bull for two centuries, and even after they were no longer the prominent family, their successors the Tudors carried on the Black Bull.

On the reverse of these 2018 2 oz Silver British Queen’s Beast Black Bull Coins is the massive, imposing Black Bull of Clarence. The Bull is featured with a shield used by Richard I and Edward III. This four-quadrant shield features French golden lilies in two quadrants to support Edward III’s claim to the French crown, and the three golden lions in the other two quadrants which were adopted by Richard I.

The obverse of Silver Queen’s Beast Coins include the right-profile portrait of Queen Elizabeth II. Her Majesty is featured here in the fifth-generation design created in 2015 by Jody Clark. Just 33 years old at the time, Clark became the youngest Royal Mint Engraver to ever design the monarch’s effigy.

2018 2 oz Silver British Queen’s Beast Black Bull coins listed here are perfect specimens. Coins with a Mint State 70 grade from the NGC show full, original mint luster and feature no detracting flaws. Early Release labels indicate these coins were received for certification within the initial 30 days of their 2018 release from the Royal Mint.

We encourage Silver.com customers to contact us at 888-989-7223 with questions. You can also connect with us online through our live chat and email address. Don’t forget, the silver spot price today is constantly updated on our website!