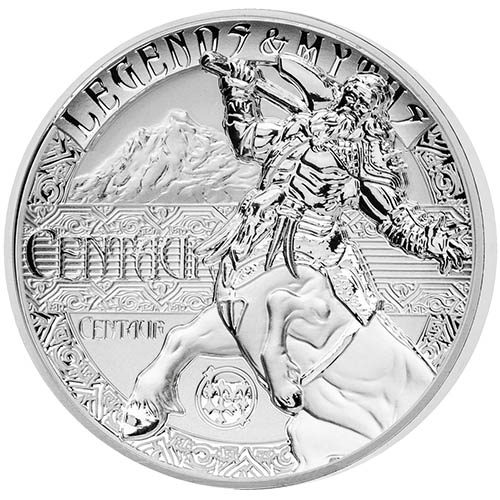 The Legends and Myths collection of silver coins for sale returns in 2018 with five new designs to enthrall collectors. The initial series, or first collection, was issued through late 2016 and into 2017 with five separate designs of mythological or legendary creatures. The 2018 2 oz Silver Reverse Proof Solomon Islands Legends and Myths Centaur Coin is currently available as the second release in 2018 and yours to purchase online at Silver.com.

Centaurs were legendary creatures of the ancient world known predominantly to the people of Greece and Cyprus. They are considered hybrid beasts, like the Minotaur, and have the upper body and head of a man, with the body and legs of a horse. There are many origin stories for Centaurs, but the most likely in the mind of modern scholars is simple confusion by ancient peoples.

Horses were not common throughout the world in ancient times. Many believe that societies with no previous exposure to horses as a breed at some point came across other civilizations that had representatives on horseback. This confusion likely led the less-informed civilization to assume that man and beast had melded into one creature.

Whatever the case, the image of the Centaur on the 2018 2 oz Silver Reverse Proof Solomon Islands Legends and Myths Centaur Coin is one of power and fright. A massive Centaur is depicted on the coin’s reverse face, with a muscular frame and a giant ax in the right hand which is ready to cut a man down in a heartbeat.

Flip the 2018 2 oz Silver Reverse Proof Solomon Islands Legends and Myths Centaur Coin over and you’ll notice the portrait of Queen Elizabeth II. The longest-reigning British monarch, Her Majesty has appeared on the obverse of British and commonwealth coinage since 1952 when she ascended to the throne. This is the fourth-generation, right-profile portrait of the Queen designed in 1998 by Ian Rank-Broadley.

All Reverse Proof Solomon Islands Legends and Myths Centaur coins are double high-relief strikes with a concave reverse and obverse design field, giving the design elements a chance to stand out in greater 3D. The reverse proof finish brings strong, frosted matte elements to the background and deeply-mirrored, clear fields on the design facets.

We encourage Silver.com customers to reach out to us at 888-989-7223 with questions. You can also connect with us online through our live chat and email address.