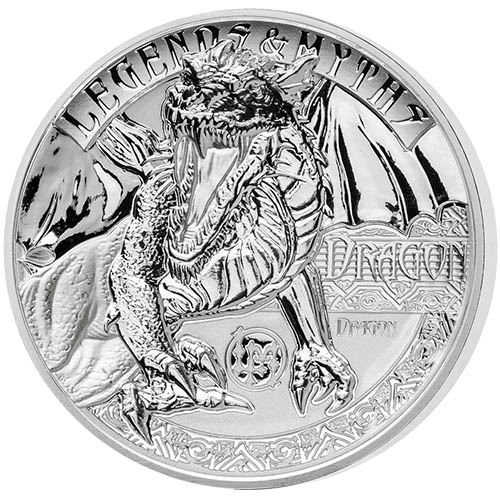 All coins in the 2018 Solomon Islands Legends and Myths release are struck on 2 oz silver blanks. Each one is a double high-relief strike with concave surfaces on both the reverse and obverse, allowing the design elements to stand out in greater 3D detail. The reverse proof finish delivers strong, frosted matte backgrounds that contrast beautifully with the deeply-mirrored, clear design elements.

The second collection of Legends and Myths coins for the Solomon Islands, the 2018 series of coins concludes with the dragon release. Dragons were mythical creatures known to cultures around the world and viewed with differing opinions and beliefs. For example, European cultures largely viewed the dragon as a flying beast that breathed fire and wrought destruction upon the world.

In a contrasting view, the people of East Asian cultures (predominantly China) viewed the dragon as a snake-like beast with magical powers that included control over the elements. The dragon was not viewed as something to fear, but rather considered a symbol of power. Many Emperors of China used the dragon as a symbol of their own power.

On the reverse of the 2018 2 oz Silver Reverse Proof Solomon Islands Legends and Myths Dragon coin is the depiction of a dragon. Engravings on this side of the coin include the series name as “Legends and Myths,” as well as the word “Dragon.”

The obverse of the Silver Reverse Proof Solomon Islands Legends and Myths Coins all feature the right-profile portrait of Queen Elizabeth II. Her Majesty is featured here in a fourth-generation depiction designed in 1998 by Ian Rank-Broadley. All coins in this collection ship inside of individual, blue presentation cases that include a Certificate of Authenticity.

We encourage Silver.com customers to contact us with questions about these coins. Feel free to call us at 888-989-7223, chat with us live online, or email us directly.