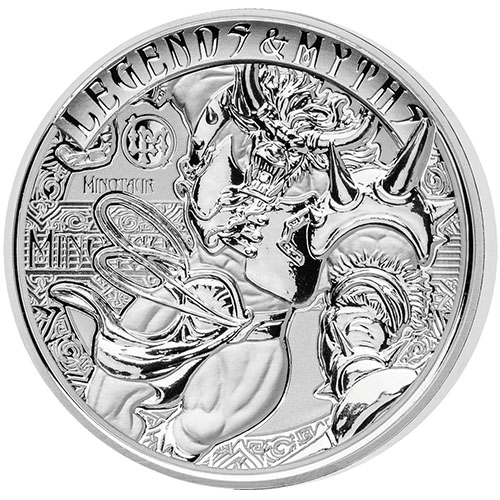 Many mythical beasts and creatures of the ancient world were associated with tales of triumph by heroes or demi-gods. The Minotaur was a half-man, half-bull creature who lived in the famed Labyrinth and died at the hands of the hero Theseus, but not before the beast took the lives of many innocent people. Today, 2018 2 oz Silver Reverse Proof Solomon Islands Legends and Myths Minotaur Coins are available to you online at Silver.com.

Like many other creatures in the Legends and Myths Series, the Minotaur originates in Greek mythology. The beast was described as a half-man, half-animal creature with the head of a bull and the body of a man. In Greek mythology, the Minotaur was the deformed son of Pasiphae, the wife of King Minos of Crete. It is said that a gift of a white bull from the sea god Poseidon was meant to be sacrificed by the king, but he instead kept it for its beauty.

Poseidon punished King Minos for his treachery by making his wife Pasiphae fall in love with the bull, resulting in her giving birth to a son that was the Minotaur. The 2018 2 oz Silver Reverse Proof Solomon Islands Legends and Myths Minotaur coin appears fourth in the new series of beautiful coins.

Each Solomon Islands Legends and Myths Coin is a reverse proof coin with strong, frosted matte backgrounds and deeply-mirrored, clear design elements. The coins are double high-relief strikes on 2 oz silver blanks that have deep, concave surfaces on both sides which highlighted the 3D nature of the design elements.

The obverse of the 2018 Silver Reverse Proof Solomon Islands Legends and Myths Coins have Queen Elizabeth II’s effigy. Her Majesty is featured here in a right-profile portrait created in 1998 by Ian Rank-Broadley for the Royal Mint.

On the reverse of the 2018 Silver Solomon Islands Legends and Myths Minotaur coin is the design of the hideous and fearful Minotaur. King Minos entrapped the Minotaur in an elaborate maze known as the Labyrinth and sent virgin slaves sacrificed to the King of Crete by other nearby nations to their death in the maze. The Athenian hero Theseus volunteered as a slave from his kingdom and ended the terror by killing the Minotaur.

Please feel free to reach out to Silver.com if you have questions. You can contact us on the phone at 888-989-7223, chat with us live online, or email us directly.